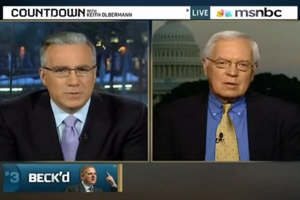 Keith Olbermann and Bill Press are very excited for the upcoming “Restoring Honor” march on Washington, set to take place on August 28th and feature Glenn Beck as its speaker and leader. Press, in particular, is curious to see how it will turn out, as the permit request for the event has yet to be approved.

Press had already compared Beck’s organization to Al-Qaeda recently, and in the shock that Glenn Beck would be holding a rally on the anniversary of “I Have a Dream,” Press contacted the proper authorities to see if it was true. On Countdown tonight, he reveals that there was no confirmation that the permit was given to Beck’s group yet, though there is still time for him to get it. And as for the advertising that the event will be on the steps of the Lincoln Memorial, well, that may not be true:

Calling Beck a liar for claiming to hold a rally a few feet away from where it might actually occur may seem like splitting hairs, but Press sees the entire event as a sign of Beck’s vision of reality as being something other than it actually is. In fact, Press argues that Beck sees himself as greater than a Founding Father (or at least with a legacy greater than Abraham Lincoln): “He sees this as the moment when America turns the corner. I really think 100 years from now he sees Abraham Lincoln off that chair and Glenn Beck sitting on it, looking at the mall.”

Olbermann generally agrees with the assessment of Beck and his event, but adds a question of his own: “Is the desecration of Dr. King’s memory part of this? Should the poster say ‘I’m there to go an be racist and blame black people where Dr. King said ‘let’s all hold hands together?'”