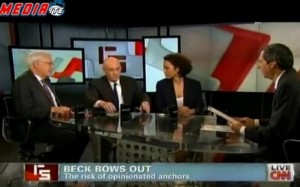 During a discussion of Glenn Beck‘s departure from Fox News’ air on Sunday’s Reliable Sources, progressive radio host Bill Press joined host Howard Kurtz in pushing back against the idea that MSNBC’s opinion personalities are somehow equivalent to Beck. While Press and Kurtz were correct in their overall assessment, Press’ declaration that MSNBC hosts are “not calling anyone Nazis” isn’t quite true, and benefits from the fact that Keith Olbermann is no longer at the network. Oddly, though, Olbermann’s record of Nazi references only reinforces the contrast between Beck and MSNBC.

Sure, there are superficial similarities between Beck and Olbermann. Both are strongly opinionated, have extremely loyal followers, and neither is a stranger to the rhetorical use of the Third Reich. Beck rightly drew fire for accusing prominent Jew George Soros of being a Nazi collaborator, while Olbermann compared prominent Jew Floyd Abrams to Nazi collaborator Vidkun Quisling.

But the research for the “Top Ten List” of Keith Olbermann’s Nazi references, compiled by our own Matt Schneider, illustrates the fallacy of the comparison. Only six of those ten were from MSNBC’s air, and those examples stretched all the way back to 1998. Beck, by contrast, makes Nazi references with such comical frequency that during my one visit to Beck’s Mercury Radio offices, I could hear the word “Nazi!” wafting out of the studio into the waiting room. I half-expected “Nazi” to be an all-purpose, “Aloha”-style salutation at Beck HQ.

However, Press also illustrates the need for liberals to hold their figureheads to a higher standard. As I’ve said before, even if the score is 50 to 1 in Nazi references, or other crazy talk, isn’t it better to be able to say “We don’t do that,” and for it to be true?

Also lost in the Beck/MSNBC foodfight is the fact that CNN employs its own noted Nazi-bomb thrower, Redstate’s Erick Erickson.

Update: The opening paragraph of this post has been updated to reflect the fact that, as commenters have pointed out, Keith Olbermann is not the only MSNBC host to ever make a Nazi reference.