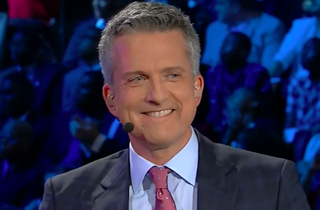 Could Bill Simmons be headed to HBO? After weeks of speculation about what the ESPN commentator and Grantland.com founder will do next after he was abruptly fired last month, a new piece in The Hollywood Reporter hints that a series on HBO may be in his future.

In an extensive interview with the magazine, HBO CEO Richard Plepler indicated that with the success of John Oliver and Vice News, he’s on the lookout for more talk show projects. On Jon Stewart’s upcoming availability, he said, “Trust me. I’ve already had a very polite conversation.”

But, assuming that option is out of the picture, THR’s Lacey Rose laid out a “more likely” scenario:

Considerably more likely is Simmons, whom the network is said to have made a big play for after his unceremonious booting from the more corporate ESPN. Such a move would be straight out of the HBO playbook, which famously provided a creative reprieve for former ABC flameout Bill Maher many years earlier. Though Simmons is said to have several suitors, insiders say con­versations at HBO have focused on a TV show — something Simmons is believed to want — along with heavy digital extensions that make the prolific personality tailor-made for the HBO Now era.

As previously reported, a position in the Time Warner family, which encompasses not only HBO but also CNN, TNT and TBS, could be the most attractive option for Simmons, allowing him to both produce documentary and interview-style programming for HBO and possibly serve as a basketball commentator for Turner Sports.

Meanwhile, Simmons’ contract with ESPN is still intact through the end of September, meaning that for another few months they are paying him to do nothing and barring him from jumping directly into any other new projects. But come October, don’t be surprised if HBO announces some sort of TV version of “The B.S. Report.”