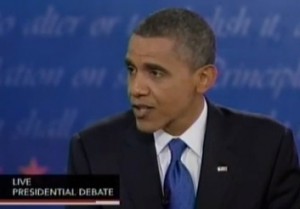 If you want something done right, you’ve got to do it yourself. After almost a year of campaigning on the idea that “of course” he would have approved the raid into Pakistan that killed Osama bin Laden, Republican presidential nominee Mitt Romney finally met up with a journalist who was willing to confront him with his own statements to the contrary. Wait, no, it wasn’t a journalist, it was President Obama, at Monday night’s final presidential debate, where he pointed out that Romney “said we should ask Pakistan for permission. And if we had asked Pakistan permission, we would not have gotten him. And it was worth moving heaven and earth to get him.”

When President Obama promised, as a Senator and presidential candidate in 2007, to go into Pakistan to get Osama bin Laden, whether Pakistan liked it or not, pretty much everyone slammed him for it, Republicans and Democrats, but not for the threatened raid. The prevalent criticism was that then-Senator Obama shouldn’t have been saying it out loud. Republicans managed to nominate, for president, the only guy who said he wouldn’t do it, over and over again.

Once bin Laden had been transitioned into a food source for marine life, and Romney was, once again, running for president, the former Massachusetts Governor claimed, repeatedly, that “other presidents and other candidates like myself would do exactly the same thing,” and for some reason, not a single journalist has challenged that assertion to his face since then.

At Monday night’s debate, the President took matters into his own hands, calling Romney out on a litany of foreign policy position changes. “Governor, the problem is, is that on a whole range of issues, whether it’s the Middle East, whether it’s Afghanistan, whether it’s Iraq, whether it’s now Iran, you’ve been all over the map,” the President said. “I mean, I’m — I’m pleased that you now are endorsing our policy of applying diplomatic pressure and potentially having bilateral discussions with the Iranians to end their nuclear program. But just a few years ago you said that’s something you’d never do.”

Then, President Obama zeroed in on the bin Laden raid. “When it comes to going after Osama bin Laden, you said, well, any president would make that call,” the President said. “But when you were a candidate in 2008, as I was, and I said if I got bin Laden in our sights I would take that shot, you said we shouldn’t move heaven and earth to get one man. And you said we should ask Pakistan for permission. And if we had asked Pakistan permission, we would not have gotten him. And it was worth moving heaven and earth to get him.”

The President’s barrage went unanswered, as moderator Bob Schieffer moved things along to the next question.

Agree with him or not, Mitt Romney articulated a reasonable position in 2007, that we shouldn’t take unilateral military action within an ally’s borders. At the time, it was even a courageous position, since he was the only one taking it. But then he should have been held accountable for that position when he clearly contradicted it, and every journalist who spoke to him since then failed to do that. Now that President Obama has remedied that, hopefully journalists will notice.

Here’s the clip, from WETA: