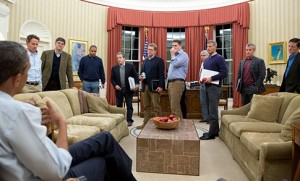 Wednesday’s authorized leak that President Obama will nominate White House Chief of Staff Jack Lew to succeed Tim Geithner as Secretary of the Treasury means that the President has filled the three most powerful cabinet positions with white males. That fact seems to run counter to the President’s victory over Mitt “Binders Full Of Women” Romney and the Republican War On Women, but in choosing Jack Lew, the President fulfilled his duty to select the person he felt was most qualified for the job. It is to the President’s credit that he didn’t feel the need to pick a woman just for the sake of picking a woman, because these posts are too important to select anyone but the most qualified person.

The problem is that he didn’t do the same for the other two of the “big three” cabinet posts.

Lew, whom Republicans are already reflexively opposing, has a lot of attractive qualities, even beyond the fact that he’s not Tim Geithner. The former Director of the Office of Management and Budget has a Chuck Norris-like command of budgetary matters; facts and figures cite Jack Lew to win arguments. He’s also not a product of Wall Street, which may not endear him to Republicans, but makes him a vast improvement over Geithner.

The Jack Lew selection rounds out a nomination trio that includes former Sen. Chuck Hagel as Secretary if Defense, and Sen. John Kerry as Secretary of State.

The intrigue surrounding Amb. Rice’s scuttled would-be nomination has obscured the most important aspect of that fight: that President Obama wound up with his second choice for a job of critical global importance. During a political essay on a completely different topic a few months ago, MSNBC’s Rachel Maddow illustrated the importance of that post, describing a 1973 incident in which the U.S. military was ordered to DefCon 3:

For the first time since the Cuban missile crisis in the 1960s, the United States military moves to DEFCON 3. For some perspective, the only other time we have been at DEFCON 3 since then is on 9/11. This is something that almost never happens. And when it does, it is historic and it is historically scary.

And when it happened in 1973, the order to go to DEFCON three was not issued by President Nixon. He was apparently asleep at the time, and the order had to be given by Secretary of State Henry Kissinger. And it had to be given because this fight in the Middle East stopped being just a fight in the Middle East. We went to DEFCON 3 that year while President Nixon was sleeping because the Soviet Union threatened to get in on that war, militarily, on behalf of not just Egypt but their long-time ally Syria.

Now, I understand that President Obama is a light sleeper, but still, any job that involves the word “DefCon” is pretty important, and whether I like the nominee or not, the President damn sure needs to have the best person for the job in the job. The only thing that mitigates the unease this produces, and perhaps explains the lack of media focus on it, is the fact that the President’s second choice, Sen. John Kerry, is no slouch.

Of course, Kerry’s nomination as Secretary of State forced President Obama to select his second choice for Secretary of Defense, former Sen. Chuck Hagel. That pick has drawn fire from the right and the left, each of whom has found things to dislike about Hagel. The right has focused on Hagel’s reference to “the Jewish lobby” in a 2007 interview, while the left is mulling over Hagel’s 1998 opposition to the appointment of U.S. Ambassador to Luxembourg James Hormel because Hormel was “openly, aggressively gay,” and Hagel’s subsequent (recent) apology for those remarks. Hagel is qualified for the post, and will likely be confirmed despite all the noise, but the key point here is that President Obama has shown a willingness to withstand blows on Hagel’s behalf.

The same cannot really be said for Susan Rice, who withdrew herself from consideration for Secretary of State after a sustained campaign by Republicans to assassinate her character in the most personal terms, and to scapegoat her for events in Benghazi that she had nothing to do with. There may be some who would argue that Susan Rice’s blackness and woman-ness made the opposition to her blaze much hotter than to Hagel, but that should have made President Obama’s defense of her that much more fierce.

It strains credulity that the President could not have convinced Amb. Rice to hang in there, that he had her back, and it has never made sense to me that the media, and the President’s advisers, somehow convinced him that doing the right thing would cost him politically. Everyone but a few Republicans agreed that the attacks on Rice were bogus, and Republicans would have looked silly carrying them out in confirmation hearings.

That’s not how it worked out, though, and now, it seems that two white males have benefited from the unfair disqualification of  a black female candidate, an inversion, in effect, of affirmative action.

President Obama has earned tremendous benefit of the doubt from women voters, both through his record and his staffing decisions. The White House points out that 43% of White House positions are held by women, and Sen. Kerry is currently being vetted to replace a national hero for women, Secretary of State Hillary Clinton. That doesn’t mean that the President should get a pass on letting Susan Rice bow out, or on learning a lesson from it. His willingness to take heat for a white, male, Republican nominee says something about why he wouldn’t do the same for Susan Rice.