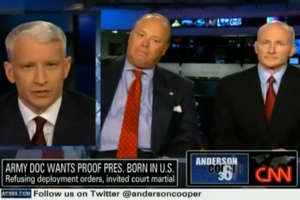 Last night, CNN’s Anderson Cooper found one of those rare 69% of birthers who actually don’t approve of Barack Obama‘s job as president– an army doctor by the name of Lieutenant Colonel Terrence Lakin who has refused to take orders since Obama’s ascent to power. Cooper was hoping to interview the doctor and get his opinion on his case, but his attorney made that task near impossible. Lakin only speaks about 3 times during the entire course of the segment.

The interview gets off on the wrong foot almost immediately, when Lt. Col. Lakin’s lawyer steps in to answer the simple question of whether Lakin really believes what he is claiming in court documents. Cooper, frustrated, addresses Lakin again in the hope of hearing him defend himself, but once again the lawyer intervenes. “Can the Colonel not talk for himself? The guy is an adult!” Cooper tells the lawyer. Apparently not yet, as his lawyer continues to dispute Cooper’s claim that a certificate of live birth is the standard form of the birth document in Hawaii, claiming a certificate of live birth is not a birth certificate.

As the interview goes on and Lakin continues to sit in silence while his lawyer becomes increasingly agitated, Cooper begins to take a few jabs at Lakin, requesting that he not “hide behind your lawyer” and noting that in a Youtube video he released, “you were talking, frankly, more than you’re talking tonight.” Lakin finally pipes up to say that he has used every avenue he could find to spread his message and receive guidance on how to proceed, because “my obligation is to the Constitution.”