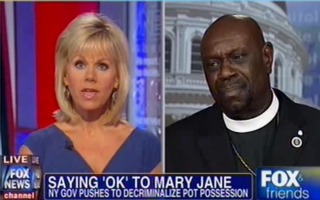 Not everyone is happy with New York State’s decision to decriminalize marijuana possession. Bishop Ron Allen, the President of the International Faith Based Coalition, appeared on Fox & Friends on Wednesday where he said the logic that crime will go down after marijuana is decriminalized was “illusionary thinking.” Furthermore, he said that the New York Police Department makes more arrests of minorities than whites as a proportion of the population and thinks “they’re trying cover something up and they want to blame it on pot.”

Co-host Gretchen Carlson opened the segment by outlining New York State’s plan to decriminalize marijuana possession and said that both Gov. Andrew Cuomo and Mayor Mike Bloomberg were behind the plan.

Carlson asked Allen “why do you have a problem with this,” to which he responded “are you kidding me?”

“I can’t believe that our elected officials think that by decriminalizing an illicit drug will cause crime to go down,” said Allen. “What illusionary thinking.”

Allen said that after California decriminalized marijuana under former Gov. Arnold Schwarzenegger, “you could smell that pot everywhere you go – from restaurants to stores.” He also said that decriminalization will increase use among teenagers.

“Marijuana is very addictive,” Allen continued. He said that the active chemical in Marijuana, THC, is found in higher concentrations in today’s marijuana than in the 1970s.

Allen went on to say that marijuana is a gateway drug which “breaks the seal of addiction” for the youth who try it. “How do you un-ring that bell,” asked Allen.

When Carlson asked if New York City had a point, that it could devote more police resources to violent criminals if they were not devoting manpower to arresting non-violent drug offenders, Allen said that New York had a bigger problem on their hands. He outlined a number of statistics that showed the NYPD arrested more blacks and Hispanics than whites as a proportion of the population.

“I think they’re trying to cover something up and they want to blame it on pot,” said Allen.