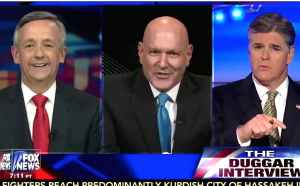 Fox News’ Dr. Keith Ablow and Pastor Robert Jeffress got into a heated argument on Sean Hannity‘s show tonight over the Duggars, whom Ablow described as “bizarre, controlling, and manipulative.”

Ablow reacted to Megyn Kelly‘s interviews with Josh Duggar‘s parents and sisters/victims, finding it a little troubling that they didn’t address whether Josh was inappropriate with other people during the same time period.

He ripped the “naivete” and persecution complex of the Duggars, and said, “I don’t know of any four people who can be sleeping and touched inappropriately… and not know it. What kind of story is this? It doesn’t make sense!”

Jeffress pushed back, defended the Duggars, and called them a “wonderful family” who’s being victimized. Ablow shot back:

“This is a great family? This is a family that turned their family into a sideshow and invited cameras into their lives in a way that exploited their children and made money from them. Where’s wonderful family that the pastor is describing?”

Ablow even said, “If you are going to have 19 children, you should supervise them well… These parents say that they didn’t let their children hold hands until they were engaged. That’s bizarre.”

And Jeffress kept shouting at Ablow that he shouldn’t be judging their choices like that, but Ablow insisted that the hand-holding seriously raises the issue of whether Josh Duggar was “repressed.”