Bizzaro World Pelosi Says: Obama ‘Has Always Been Very Respectful Of The Views Of The Republicans’ 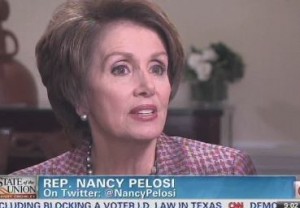 House Minority Leader Nancy Pelosi made a statement during an interview with CNN’s Candy Crowley that is so ridiculous on its face that it’s hard to keep a straight face while watching: President Obama is committed to bipartisanship and respects the ideas of Republicans. Anyone that has been paying attention to the last four years knows this is simply not true.

“The president has always been very respectful of the views of the Republicans in the Congress and their leadership and their membership. He always tried to accommodate it. This idea that but for that we would have gotten all these other things done is just not reality,” said Pelosi.

All one needs to do is look to the Republican leadership to see that this sentiment is not reciprocated. Earlier this year House Speaker John Boehner told a gathering of Republicans that he believes Obama is committed to destroying the Republican Party. This is sentiment echoed by Republican voices in the media, too. So if Obama, as Pelosi declares, really respects the GOP ideas and leadership he’s probably not doing a very good job of showing it.

To Pelosi and Obama’s credit, it’s not like the Republicans really respect the ideas of the Democrats either.

Crowley notes in the interview on State Of The Union that while Pelosi says the president respects the GOP leadership and its ideas he is actively pledging his time and resources to defeating House Republicans in 2014. Pelosi doesn’t see the problem with this and somehow in her world these actions are totally different from Senate Minority Leader Mitch McConnell’s famous efforts to make Obama a “one-term president.”

“When Mitch McConnell said that, he was talking about stopping, obstructing initiatives to create jobs, stopping initiatives that would show bipartisanship on the part of the president. They want to show, they wanted to show, that he couldn’t come to agreement with the Republicans simply…it didn’t matter what the subject was they were not going to support it,” she said.

So, in Pelosi’s world a Democrat can seek bipartisanship and respect the ideas of Republicans while actively working to defeat them at the ballot box while a Republican cannot. Got that?

This type of bipartisan voodoo is something both Team Red and Team Blue try all the time. When something doesn’t go your way just claim moral superiority by saying you respect the other side and are ready to work with them even though you think they’re a bunch of raving idiots.

Watch below clip via CNN.