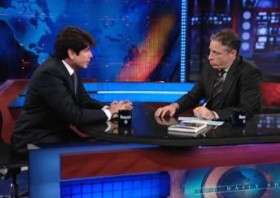 Disgraced former Illinois Governor and thwarted reality star Rod Blagojevich was on the Daily Show with Jon Stweart last night — and Chicago was not impressed.

The Chicago Tribune‘s Eric Zorn wanted it to be more hard-hitting: “Usually nimble host Jon Stewart, like so many talk-show hosts before him, kept the focus on the senate-seat issue — potentially one of the weakest items in the bill of particulars — and let Blagojevich prattle on about how once we hear all the tape recordings we’ll realize he was only acting on behalf of the people of Illinois, not himself, and this is all some ghastly misunderstanding.”

NBC Chicago’s Andrew Greiner thought Stewart let Blago dominate him: “Stewart did his best to keep Blagojevich on the funny — numerous hair jokes were made — but the former governor, for the most part, controlled the segment and hammered home his message of innocence, by touching on many of the themes in his book The Governor.”

Chicago knows better — and they’ve had years of listening to Blago, and an earful of his tall tales. For the rest of us…well, it passed long ago from news into entertainment. Last night’s interview was jovial and genial, partly because it didn’t matter what Blago said — his credibility is nil, we all know that.

But just because it’s not awkward and belligerent does not mean it’s not effective — or entertaining. Here Jon Stewart just let Blago talk — and the full extended interview, below, is just over 18 minutes — and make his case for why he’s innocent. It boils down to “there’s a tape out there that PROVES I didn’t do it!” and despite Zorn’s and Greiner’s exasperation, I don’t think anyone watching that interview was fooled. All they saw was Jon Stewart gently letting him unspool his story, and querying him on known facts and logic along the way. Said Stewart: “I want to believe you! You are a charming dude with the best head of hair I’ve ever fucking seen! So I want this to be real!…But it’s hard to believe.”

The operative part there is “You’re a charming dude” — Blago makes for a great guest, or a funny New Yorker article or whatever, and so he’ll keep on making the rounds to spin his story. As long as he doesn’t suddenly get squeamish about what he’s spouting — and he won’t — then he will be on someone’s couch, or possibly singing Elvis. Unless he’s in jail. Draw your own conclusions about that — Jon Stewart said he’d have Blago back on for a hug if he was vindicated, and I’m sure he meant it. But let’s just say no one expects to see him hugging Jon Stewart any time soon.