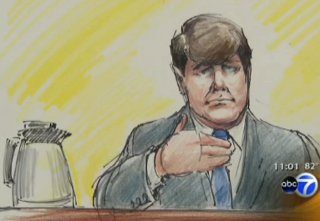 After a Memorial Day respite that likely served only to give everyone involved time to catch up on “weinergate,” the Rod Blagojevich corruption trial has resumed. Blagojevich, still on the stand but now being forced to answer to his incriminating conversations with staffers, has found a new roadblock in his testimony, and it has nothing to do with the facts of the crime: the prosecution is “making faces” at him.

The last time we caught up with this legal circus, Blagojevich was pontificating on the beauty of Elvis music and the wonderful hair people used to sport in the late 1970’s (and that, of course, he still bravely does). With all of that highly salient information out of the way, Blagojevich is now being led through hours and hours of recorded conversations where it is starting to sound quite a bit like Blagojevich was involved in some sort of graft, and was willing to trade government favors for cash. Despite being convicted of only one count of lying to the FBI the first time around, he faces 20 counts of corruption in this second trial.

Before Blagojevich’s testimony about a conversation with former aide Lon Monk, his attorney’s demanded that Judge James Zagel (a man of patience, if nothing else at this point) stop the prosecution from “making faces” at him. ABC Chicago explains the scene:

The defense is accusing prosecutors of ”making faces” while former governor Rod Blagojevich testifies in his corruption trial.

Lauren Kaeseberg, a Blagojevich attorney, told Judge James Zagel during the Tuesday morning break that the defense thinks prosecutors are distracting jurors with grimaces and frowns.

Judge Zagel said, “I did not see any of this” but said he will watch prosecutors closely. Zagel said the only faces he has seen are coming from the first row behind the defense, which is where Blagojevich’s wife, Patti, is sitting.

In other Blagojevich news, he would really, really like the jury to know he is sorry about his profanity. The full report via ABC below: