Blame Game Roundup: Where Pundits And Politicos Are Pointing Fingers On The Debt Crisis 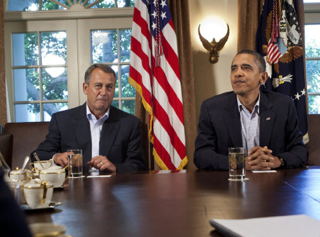 Finger-pointing is perhaps Capitol Hill’s most beloved pastime, though some may argue that in light of America’s first credit downgrade and a month of financial gridlock, it has evolved from hobby to obsession. Mediaite has already looked at some of the media figures whose profiles have risen and fallen over debt crisis, but who were they blaming to get there? The answer is a hodgepodge of President Obama the Tea Party, and, given it’s 2011, a surprisingly frequent President Bush references.

Below are some highlights in the Political Mediasphere Blame Game over the past month that say little about who is actually to blame for our current economic woes (other than, of course, “everyone”) and a lot about how easily recyclable political narratives can be.

It’s Barack Obama’s Fault For Being Too Flimsy

As both the left and the right attacked President Obama for being ill-equipped to negotiate with the Republicans, there are two variances of this attack. The on on the left came from those who believed the President to be giving up too much by agreeing not to increase federal revenue, as Matthews notes by calling the President too “cute” and “coy,” and Maher highlighted with his signature “uncomfortably racist, even if he is a liberal” joke-cracking (pun intended).

Then there is House Speaker John Boehner, who railed angrily against the President and Congressional Democrats to “put something on the table” in Congress or simply accept the Republican plan. Of course, this line of argument doesn’t make the President out to be a weakling so much as a whiner who would rather criticize the Republican plan without doing the work of offering an alternative. It would be an effective argument, except for the fact that Congressional Democrats did put something on the table.

It’s John Boehner’s Fault For Being Too Flimsy

Used By: The Tea Party

A rare argument to find during the debt debate, but there were some elements of the Tea Party who were more than ready to dismiss the Speaker of the House for not being steadfast enough in negotiating with the Democrats. Take, for example, Jenny Beth Martin of the Tea Party Patriots, who accused the Speaker of “compromising with our values” by agreeing to raise the debt ceiling, a move some elements of the right found absolutely unacceptable.

It’s Barack Obama’s Fault For Being Too Stubborn

While it may seem to be a bit of a contradiction to argue that the President was too flimsy in not offering any solution to the problem and too stubborn to accept the solution, Speaker Boehner used both attacks, the latter with far more efficiency. Arguing that the President would “not take yes for an answer” in his response to the President’s first national address on the matter, he suggested that the argument that it was he holding up talks was entirely false, and that the President was to blame for not wanting to sit down and talk things through. The Rep. Eric Cantor “don’t call my bluff” private incident did little to clear up who was really being the holdout here.

It’s John Boehner’s Fault For Being Too Stubborn

Unsurprisingly, “intransigence” became one of the premier buzzwords of the debt crisis debate, not the least because it became the White House’s official position that the Republicans were acting like children. While House Majority Leader Eric Cantor got the brunt of it for the bizarre private incident with the President, the House Speaker, by leading the party, took as much as he received from his right for being too willing to negotiate. In light of the S&P downgrade last weekend, Maddow came out swinging against Republicans, arguing that their “any deal is a bad deal” philosophy was to blame. But long before that, White House Press Secretary Jay Carney was accusing Republicans of “juvenile” antics to get what they wanted.

NEXT PAGE: The Tea Party Pile-Up