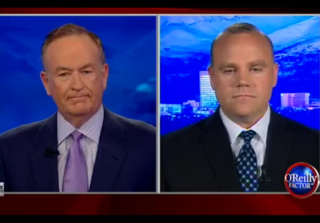 Blind Allegiance author Frank Bailey promised that his book would uncover the horrible scam that Sarah Palin perpetrated on Alaskans when she lost sight of her promises to the state and sold herself to the limelight. But the Palin he thinks he depicted in his book seems to have eluded Bill O’Reilly, who in his interview with Bailey last night insisted that the Palin in his book was “pretty good!”

Bailey argued that his book was so potent, “the Colonel of the Alaska State Troopers has this book on his shelf as an example of what happens when we lose our way.” But when O’Reilly asked him to explain how, exactly, Palin lost her way so thoroughly, Bailey stuck to answers O’Reilly found unsatisfying. “The person that we saw in 2005,” Bailey argued, “we lost that to the limelight, to the power and the fame of being constantly followed by the media.” O’Reilly argued, however, that her corruption by the media was actually a good thing– or, rather, that it was a good thing that she resigned when she did, because she realized she could not longer handle being governor and a national figure.

“People evolve,” O’Reilly argued, “of course she’s going to change” after 2008. When Bailey ceded that “it’s as much a story about me as well,” O’Reilly cut him short– “with all due respect, people aren’t that interested in you.” O’Reilly continued to insist that “I read the book and I didn’t feel your disappointment, I don’t know what she did to make you so disappointed,” but Bailey didn’t add anything new to his charges, other than “she did some good things,” which doesn’t exactly help his argument. Ultimately, though, he concluded that Palin “cannot rise above petty criticism,” and that weakness cost her the loyalty of her state. “If this is the worst that Gov. Palin did,” O’Reilly countered, “She’s pretty good compared to most politicians.”