Blitzer Grills Ben Carson Over His Gays/Pedophile Remark: ‘You Understand How Offensive That Might Be?’
video

Blitzer Grills Ben Carson Over His Gays/Pedophile Remark: ‘You Understand How Offensive That Might Be?’ 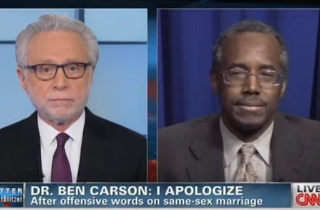 After newfound conservative “folk hero” Dr. Ben Carson lumped pedophiles in with same-sex couples during a Fox interview this week, CNN’s Wolf Blitzer grilled the neurosurgeon this afternoon on what he meant by the remarks. Reiterating his earlier apology on the comment, Carson told Blitzer he had “no intention” to cause offense and that he is learning to be more “artful” in presenting his beliefs on the national stage.

While appearing on Fox’s Hannity earlier this week, Carsons aid that “Marriage is between a man and a woman. It is a well-established, fundamental pillar of society. And no group — be they gays, be they NAMBLA, be they people who believe in bestiality — doesn’t matter what they are, they don’t get to change the definition.” The comments caused a great deal of controversy as many same-sex marriage advocates saw this as a continuation of conservatives comparing homosexuality with bestiality and pedophilia.

“I have always advocated equality for everyone,” Carson began his explanation to Blitzer. “As a Christian, we have a duty to love everyone and to love them as ourselves. So, you know, I love gay people. I love straight people. So this was really, I think, on my behalf, somewhat insensitive and I certainly apologize if I offended anyone because I was not in any way comparing gays with people who engage in bestiality or sexual child abuse.”

He went on to explain that his point was to show that “no group really gets to have a special dispensation so that they can change the definition of something that was established by God.”

“It sounded like you were lumping in beastiality, pedophilia, together with same-sex marriage and you understand how offensive that could be,” Blitzer challenged the doctor.

“That was certainly not the intention at all,” Carson replied. “The intention was simply to say, that there is no group and, you know, you could pick any group of different things and I should have picked a different group of things to make a point. But, you know, one of the things I’m learning, as I spend more time on television, is how to be more artful.”

Blitzer pressed on, telling Carson, “You’re not the first person that lumped in this notion that if there’s gay marriage there will be a slippery slope. It’ll lead to what you describe yourself as bestiality or pedophelia and all sorts of other outrageous examples.”

“It may be subconsciously having heard that,” Carson said, “but you know, the fact of the matter is, I believe that gay people and straight people and any people, any two adults, have the right to freely associate themselves and to form a legal bond which gives them the right to property, visitation rights, and the other things that they’re seeking.”

Asked why not just let them have the ability to get married, the doctor responded that “if we begin to change definitions of pillars of society, where does it stop?”

“Nobody should have the right to change the definition of marriage,” he added.

When asked about a recent American Academy of Pediatrics report that affirms the ability of same-sex couples to raise a child as well as a heterosexual couple, Carson reiterated that he believes same-sex couples have the right to legally establish a domicile together, but that “I fail to understand why they have to call it marriage.”