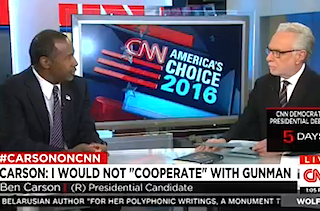 Towards the end of a tough week on the campaign trail, Ben Carson visited CNN Thursday afternoon where Wolf Blitzer systematically went down the list of controversies that have plagued his candidacy of late, from his apparent victim-blaming after the Oregon shooting to his rejection of a hypothetical Muslim-American president.

“No, I’m not suggesting that at all,” Carson told Blitzer when asked if he is blaming the victims for failing to fight back in Oregon. “Knowing that you were next to be killed and that they were going to continue down the line killing people, I would much rather go down fighting, and if all of us attack the shooter, the chances are strong not all of us will be killed,” he explained. “To me, that doesn’t seem like a very controversial thing. When you take it out of context and you try to make it look like I’m criticizing the victims, that’s when it becomes controversial.”

This led Carson to share his unconventional take on the First Amendment: “The press is the only business that’s protected by the Constitution. The reason they are protected is it was assumed that they would be honest and be on the side of the people and not have an agenda.” Blitzer pointed out that there several different types of “press” with various agendas, but decided to move on instead of going down that road.

Later in the interview, Blitzer asked Carson to comment on Rupert Murdoch’s assertion that he would be a “real black president,” unlike President Barack Obama.

“I know Rupert Murdoch, he’s not a racist by any stretch of the imagination,” Carson said, calling the whole thing “much to do about nothing.” The candidate added, “I believe what he was making reference to was the fact that here was a man who is a black president that the black community was very excited about, who came in and whose policies have not really elevated the black community, has not been beneficial, there’s more unemployment, more poverty.”

But when Blitzer asked Carson if he believes Obama is a “real black president,” Carson would only say, “he’s the president and he’s black,” accusing the host of playing around with “semantics and political correctness.” Carson would admit that Obama was born in the United States, but as for the president being a Christian, he delivered the standard “I’ll take him at his word” response favored by many on the right.