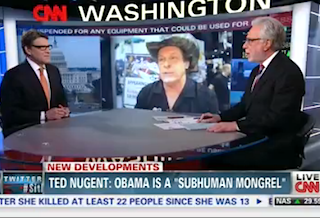 CNN’s Wolf Blitzer is not letting up when it comes to Ted Nugent. Thursday, The Situation Room host sat down with Texas Governor Rick Perry and spent nearly the entire interview trying to get him to admit how “disgusting” is was for Nugent to call President Barack Obama a “subhuman mongrel.” Now that the Republican who wants to succeed Perry, Attorney General Greg Abbott, is campaigning with Nugent, Blitzer wanted to know what he thinks of the controversy.

“That’s pretty tough words,” Perry began after watching the clip of Nugent making the now infamous comments. “We agree that that is not appropriate language to use of the United States president.” He probably thought Blitzer would then move on to other topics, but this conversation was just beginning.

“I’m not going to get into this side of whether it’s appropriate or not,” Perry said after Blitzer asked him about Nugent’s relationship to Abbott. “There are people who say things all the time. The idea that Ted Nugent has said something that’s outrageous shouldn’t surprise anybody.” When Blitzer said it was “beyond the pale,” Perry tried to change the subject to the “job situation in Texas.”

When that tactic didn’t work, Perry tried the Newt Gingrich approach, finding someone on the other side of the aisle — in this case Bill Maher — who has said outrageous things and also made a large donation to Obama. “When Democrats say sick, obnoxious things, we report that as well,” Blitzer shot back “We’re not shy about that.”

Before moving on, Blitzer pressed Perry to say whether he would ever appear at a campaign event in the future with Nugent unless he issued a formal apology to the president. On this question, Perry hedged, calling Nugent “a proud and a strong defender of the Constitution of the United States,” adding, “we’ve all said things that we would like to reel back in.”

“He was a good rocker in his day,” Blitzer lamented, “but he’s gone way over the top on this. It gets me a little agitated, as you can tell.”