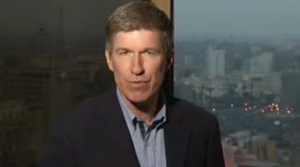 Fox News’ Greg Palkot says his kidnapping and beating at the hands of a group of thugs in Cairo has dramatically impacting his feelings about the uprising in Egypt: “The experience we endured filled us with revulsion at those Egyptians who use violence and repression and those in higher places who support those actions. It also filled us with a deep admiration for the good and courageous Egyptians who will be continuing the struggle today and the days to come, who are putting their own lives on the line.”

Palkot has written a first-hand account of the attack on himself and his crew Wednesday, which began after the Fox News team was shooting video of protests in and around Tahrir Square:

A short time after we started our shooting, cameraman Olaf Wiig was threatened by a small group of pro-Mubarak thugs.

We ducked down an alley. It turned out to be a dead end, so we dashed into a nearby building.

That building, Palkot explains, seemed a good–and safe–vantage point to cover the protests, but it was exactly the opposite. “It quickly turned into a battle station for the pro-government side,” said Palkot in a story posted today on FoxNews.com.

A friendly Egyptian offered the crew a place to hide in his apartment, but they were soon forced to run:

When a Molotov cocktail smashed through the window of the room we were in, spreading gas over the floor, we decided that was it. We weren’t going to go up in flames. We were going to make a run for it. We rushed down the stairs and out on the street.

It was on the dash toward their hotel that the Fox News crew was beaten:

Within seconds Olaf and I were spotted as foreigners and attacked. They hit us with their open hands, their fists, sticks, bars, rocks, whatever was around, especially aiming at our heads. They grabbed us and punched us. Several dug through my pockets. All the while screaming madly in our faces. But still we pushed on.

Palkot says he and his crew climbed into a military vehicle and were safe–for a time–before being blindfolded and taken into custody, passports seized and suggestions made that they were spies. As quickly as it began, it ended, with the crew released and, ultimately, bound for home.