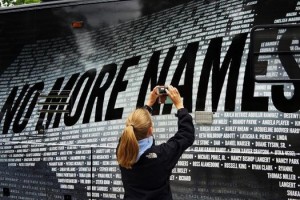 If your goal is to highlight the tragic deaths of innocent people to gun violence, you might want to double-check that everyone you’re highlighting is actually innocent. Yesterday, Michael Bloomberg‘s group Mayors Against Illegal Guns held a rally in New Hampshire and read out the names of everyone who has been the victim of gun violence since Newtown. One of those names was Tamerlan Tsarnaev, one of the two brothers suspected of bombing the Boston Marathon in April, who was killed by police during a gunfight days after the bombing. Bloomberg’s office was forced to issue an apology today for Tsarnaev’s inclusion in the list.

According to the New Hampshire Union Leader, Tsarnaev’s inclusion in the list earned the wrath of several groups, including the New Hampshire Republican party, which called it “outrageous” that Bloomberg’s group would label “this monster… as some kind of victim.”

Bloomberg’s office had to issue an apology earlier today to explain why Tsarnaev’s name was in the list to begin with.

Alex Katz, deputy communications director for the Mayors Against Illegal Guns campaign, said rally organizers relied on a list compiled by Slate.com of people killed by guns since the Dec. 14 massacre at Sandy Hook Elementary School in Newtown, Conn., “and his name was on the list.”

Slate, of course, had to explain why Tsarnaev was on their list.

The interactive is not a list of “victims” of gun violence—in fact, the interactive never uses that word, for this very reason. It is a pure accounting of deaths, provided, as our original partner in the project @GunDeaths notes, “regardless of cause and without comment.”

The interactive includes a link to a news story about every death, so that anyone reading it can check the sourcing and see how the death happened. Tsarnaev makes the list because he was killed by gunfire.