Bob Beckel: In High School Today, The Guys Look Like Drug Dealers And The Girls Look Like Hookers
video

Bob Beckel: In High School Today, The Guys Look Like Drug Dealers And The Girls Look Like Hookers 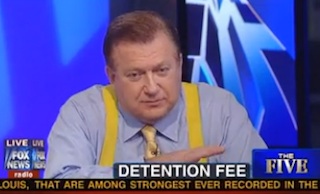 What is the age when a human being gets old enough to start hating “the kids today”? It starts quietly. From the instant we turn 18, we’re already looking at our high school’s incoming freshmen and complaining about how “young they look.” As the years pass, these feelings of age and inferiority spread like a sickness until we’re old enough to start referring to marijuana as “dope” and giving a crap how short the skirt is on the latest pop princess. While this problem may be a sad fact of human existence and a symptom of our own terrible mortality, it also makes TV anchors say hilarious things whenever they end up talking about youth issues. Take for example Bob Beckel’s sudden shift into becoming the dress code police on today’s The Five.

I bet he didn’t even know what was happening. After all, he wasn’t supposed to be talking about kids’ clothing. He was talking about a program that some Chicago charter schools have adopted in which they charge their (mostly low income) students actual money whenever they misbehave. However, instead of discussing the merits of this, suddenly Beckel was talking about how, “if you go to a high school today, all the boys look like drug dealers and all the girls look like hookers.” Thinking like that probably popped into Beckel’s head as mysteriously as the phrase “they don’t make them like they used to” will one day pop into all of our vocabularies.

Of course, as mysterious as that may be, even more insane was what happened to myself as I watched this segment. As I watched all of the Fox News hosts defend the schools’ program, I realized that the only person I agreed with was Eric Bolling.

Now, if you’ve read the columns I’ve written on this site or any of my Five write ups in the past, chances are good that you’ve noticed my personal beliefs rarely meet up with Bolling’s. And I almost never only agree with him. However, here I was, listening to the other hosts agree with Chicago Mayor Emanuel’s claim that you can’t argue with the schools’ success (a large amount of their students end up in college), and nodding furiously when Bolling started explaining to them the magic or correlation versus causality.

“Yeah, I don’t love this idea. First of all, what if the kids don’t have the money and the success, by the way, is probably because it’s a charter school, not because they’re charging kids five bucks for chewing gum.”

Maybe I’m getting old myself and therefore losing my mind. That’s the only explanation I can come up with when Bob Beckel’s turned into Mr. Family Values and I’m agreeing with Eric Bolling as he argues with Fox News hosts who are actually defending Rahm Emanuel.