Bob Beckel Offers Staunch Rebuttal To Bill O’Reilly: ‘Drug Abusers Do Not Want To Kill Themselves’ 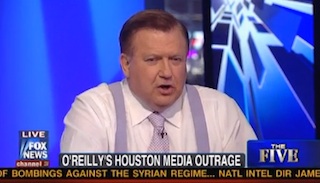 Drugs have been all over the news recently and, in many cases, it seems like those debating them and their handling by police and the media don’t have much first hand experience. Bob Beckel, a man with an admitted history with drugs, changed that today on The Five. To start off today’s show, he offered a strong counterpoint to Bill O’Reilly’s controversial comments about Whitney Houston and other addicts wanting to kill themselves.

RELATED: Bill O’Reilly: ‘Whitney Houston Killed Herself, Do We All Understand That?’

Here’s what Beckel had to say:

“Listen, I think Bill O’Reilly is talking in a place where he knows not where it comes from. I was a substance abuser for many decades. I did not want to kill myself. I was not proud of the fact that I did. When I started and most people do start using drugs because they are peer pressured, because they like them like alcohol, because of a lot of reasons. It gets out of hand. And, yes, people do die. It’s tragic. I’ve seen it, I’ve lived with it, I’ve been with people who died in front of me who used drugs. I don’t think we need, necessarily, someone who hasn’t been there to try to explain this to people. People who are drug abusers do not want to kill themselves. In fact, quite the opposite. They generally tend to be wusses who don’t want to die. And I’ve seen this happen over and over again. Maybe they’re deep down in the gutter, maybe then. But, in most cases, they don’t want to die. They make the choice, that is true. But it is not something that is a death wish. That is the wrong message.”

Now, while he may have disagreed with O’Reilly’s message, Beckel didn’t disagree with everything that his fellow Fox News host said during his appearances this morning on America Live and The Today Show. He agreed that the news media has “glorified” drug use. Beckel argued that the media and the people who knew Houston “undermined her, not knowingly maybe,” by continuing to put her out there without stopping her and giving her the real tough help she needed.

It was an interesting discussion all around and you can watch the segment from Fox News below: