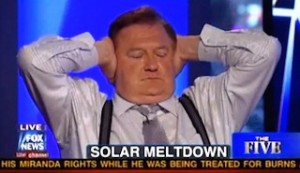 Bob Beckel has no problem making it clear when he’s not interested in a particular topic being discussed on The Five (for example: watch him amusing himself and deconstructing a segment on the disappearance of tourist in Aruba). Recently he’s made it very clear that he has no desire to talk about the failure of the solar company Solyndra and the questions over the stimulus money they received. Today though, he flat out refused to talk about it at all, saying it was nothing but a fake scandal ginned up by the Republicans to attack President Obama.

Beckel sat, clearly annoyed, as the story was laid out by his co-hosts. When it was finally his turn to talk, he made his opinion very clear:

“I’d like to be not interrupted here because this is the last time I’m going to say it on this subject. This story on Solyndra is a clear effort to smear Barack Obama by suggesting he gave government guarantees in exchange for campaign contributions. It is a classic Republican scam. It is based on no evidence except for these little emails you’ve got and, as far as I’m concerned, we won’t talk about the $50 billion in no-contract bids that Halliburton during the Iraq War from Bush and Cheney but we will talk about this. It’s the last time I’ll talk about it. I refuse to talk about it anymore. You guys go talk about it but, for the next days we do, I’m out of the conversation. It’s slanderous and libelous and you should be…ah, never mind.”

As the segment continued, Beckel began inching his chair further and further away from the table. He then plopped his feet up on it. And then he covered his ears with his hands. Before this segment, he “teased” it by saying it was for “anyone interested in this crap.”

So, I’m not sure I’m getting this. Bob Beckel isn’t a fan of this story, right?