Bob Beckel Stands Up For Newt: ‘I Know From My Own History’ Gingrich Isn’t Racist
video

Bob Beckel Stands Up For Newt: ‘I Know From My Own History’ Gingrich Isn’t Racist 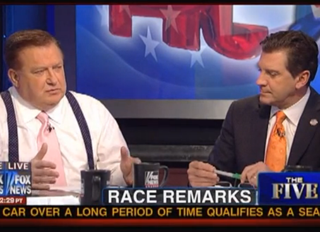 Race as an issue is increasingly rearing its head in this year’s Republican primaries, with many now accusing Newt Gingrich of race-baiting by calling President Obama the “food stamp president” and calling for underprivileged children to get jobs as janitors. On tonight’s The Five, the panel discussed the race issue and came to a near unanimous conclusion that Gingrich wasn’t racist. Even Bob Beckel agreed on that one, but explained that his language did sound inflamed with subtle racial cues on occasion.

RELATED: Juan Williams On Newt Gingrich Showdown: ‘I Don’t Think He Answered The Question At All’

Beckel introduced the discussion with a montage of clips of people on the left attacking Gingrich for using racially insensitive remarks. Kimberly Guilfoyle was the first to react, saying only that “I don’t see it,” and that she tried to find the racial undertones in the “food stamp” comments but say little to nothing. Eric Bolling agreed, adding that, as a fact, it was true that more white people than minorities were on food stamps, so the comment was not inherently racial. Dana Perino noted that this was not a new development in politics, and that she did not believe that Gingrich could have escaped scrutiny on this point: “Gingrich could’ve said ‘the sky is blue’ and somebody would’ve said there’s a code word in there.” The entire “speaking in code” issue amused Greg Gutfeld, however, as he did not see the use of codes that were so routinely and publicly broken by the left, allegedly. This, he continued, was the sort of race-baiting that formed the “last refuge of intellectual cowards.”

Beckel agreed in the specifics: that in his personal experience– working with a liberal group to elect Gingrich when he was running against an “overt racist,” Beckel did not believe Gingrich to personally be racist. But in terms of comparisons to Nixon’s “Southern Strategy,” “for some of us,” what Gingrich has said “is a code and it’s not very covert.” He explained that even though facts refute this, “the general view is that people on food stamps tend to be inner city and black,” and that when he starts using language that makes it sound like he wants minority children to clean toilets for a living, he has a bit of a problem. On the rhetorical point, Perino agreed that “this is where Gingrich gets into a bit of trouble.”