Bob Beckel Tears Into Jon Lovitz: ‘Shut Your Mouth And Go Someplace Else, Because You’re A Turncoat’ 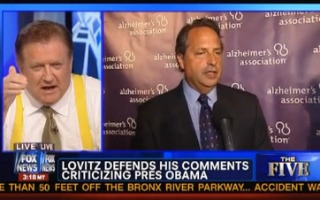 On Monday evening’s edition of The Five, the panel dove into the #duhrama surrounding former SNL castmember (and, more importantly, star of The Critic) Jon Lovitz over recent comments he made about President Barack Obama‘s supposed attitude towards the rich.

Lovitz, you may recall, launched into an expletive-laden diatribe against the “bullshit” that is the talk surrounding taxes and the wealthy:

This whole thing with Obama saying the rich don’t pay their taxes is fucking bullshit. And I voted for the guy and I’m a Democrat. What a fucking asshole.

The rich don’t pay their taxes? Let me tell you something, right. First they tell you–you’re dead broke–This is the United States of America, you can do anything you want, go for it. So then you go for it, and then you make it, and everyone’s like, “Fuck you.”

Later, evidently taken aback over the response his original comments had garnered, Lovitz Tweeted the following: “Because I criticized the President, it’s news? Last I checked, he’s President, not King! This is America! Freedom of Speech. what’s the bfd?”

“Yeah, he was wrong there. He doesn’t read the New York Times because [Obama] is king. He just torched his career,” laughed host Greg Gutfeld. “It’s a very small fire, but you’ve got to give him credit; he’s got guts.” Gutfeld added that, while there is a market for people going off on President Obama, it’s not something that’s going to fly in Hollywood.

Bob Beckel, meanwhile, referred to Lovitz as an “overrated jerk,” and thought Lovitz’s characterization of the President as an “effing liar” rendered him an “effing jerk” who ought to “shut your mouth and go someplace else, because you’re a turncoat.” He then extended an invitation to the comedian to join him at the fat farm.

“If he’s out of lockstep, the left hates him,” Gutfeld observed.

“I thought it was ok if you’re a comedian to say these outrageous…” began Eric Bolling, referring to the recent hubbub (indeed, “hubbub”) surrounding HBO host Bill Maher comments about Sarah Palin.

Dana Perino ventured that there are many people who feel the same way as Lovitz, but they keep their feelings bottled inside. Uncomedically.