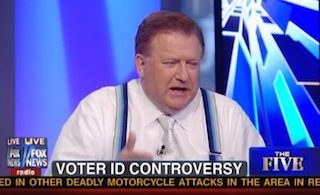 Today on The Five, Dana Perino told a story from over the weekend about how she’d seen a senior citizen get carded in an airport bar. While Greg Gutfeld helpfully pointed out the many practical reasons why restaurants and bars instruct their employees to card everyone, the point of the anecdote, besides totally hurting the feelings of the woman in the story who was actually my 25 year old friend Jane (She got super into tanning salons in the early aughts. Let this be a lesson to all of us), was clear; to illustrate how silly Perino thinks the uproar over various states’ proposed voter ID card laws are. Most of the panel agreed except for Bob Beckel who went off on the law and one of its champions for what he saw as being a planned attempt to disenfranchise minority voters who typically go Democrat.

“Let me try to put some facts on the table. In order to vote in Texas you need either a driver’s license or you need to get a personal identification card which are issued at driver’s licenses facilities. Right? Now, one third of the counties — almost all Hispanic — in Texas have no driver’s license facility so you have to drive a long way to do it. The first bill said, ‘Ok, we’re going to pay for citizens to drive, their cost to go do that or extend the hours that the motor vehicle department is open,’ and both those Republicans defeated. And this is clearly what I said last week; an effort to keep Hispanics away from the polls.”

Beckel summarized his feelings by telling Gov. Rick Perry that he can “take it and shove it.”

Interestingly enough, it was a day full of segments about touchy subjects for Latinos on The Five. Before the voter ID talk was a lengthy conversation about new immigration detention centers that are possibly two cushy for illegal immigrants. In the midst of all this talk, Beckel made the point that it was conversations just like this that caused the Republican party to lose Latinos despite having similar values.

Fortunately, no one watching could get the wrong idea. Carefully sandwiched between the analysis that detention centers should be harder and ID cards should be in effect, the hosts did a short segment where they revealed poll numbers showing that Americans of Hispanic descent…get this…actually do like America! The hosts then went around the table enthusing how much sense those numbers made to them.