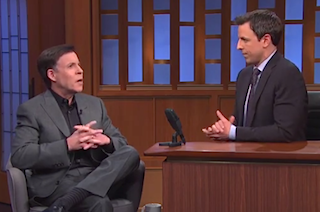 Last night NBC Sports anchor Bob Costas sat down with Seth Meyers on Late Night and during the interview offered up a strong defense of his tendency to discuss politics in the context of sports. Costas caused some controversy by bringing up the NFL’s “gun culture” during Sunday Night Football in 2012 and more recently for discussing the policies of Russian President Vladimir Putin during the 2014 Winter Olympics.

“No matter how you feel about the Second Amendment or gun control, leave that aside,” Costas added, “there is a gun culture in sports.” He listed off the various athletes who have been charged with gun crimes since he made his comments less than two years ago.

Costas proceeded to offer up a bet to “anybody to who, anytime they hear the word ‘guns’ automatically goes off like, ‘They’re going to repeal the Second Amendment!” Looking at news stories over the next five years, he predicted there will be more tragedy associated with athletes having guns than “good and constructive” things.