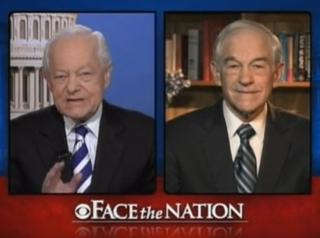 Rep. Ron Paul was on the receiving end of some of the hardest questions he has taken since the 2012 campaign for president began, perhaps not in small part due to his recurring appearance at the top of Republican polls. On today’s Face the Nation, Bob Schieffer pressed Rep. Paul to explain how his attitude towards American foreign policy did not amount to “saying Americans caused 9/11,” and how he would deal with Iran in a way that would guarantee safety.

Schieffer began by asking whether Rep. Paul thought “9/11 happened because of actions that the United States took.” “I think there’s an influence, and that’s exactly what the 9/11 commission said,” Rep. Paul replied, “there is a connection.” That said, Rep. Paul opposed the attitude that terrorists “want to do us harm because we’re free and prosperous.” That, he said, was a “very dangerous notion, because it isn’t true.”

Schieffer then asked directly: “What you are saying is that it was America’s fault… you’re saying Americans caused 9/11?” Rep. Paul clarified that that wording made it sound like all Americans were responsible, and that “the average American didn’t cause it,” “but if you have a flawed policy, it may influence it.” With that he added somewhat defensively that “you’re supposed to be able to criticize your own government” without being accused of being on the terrorists’ side. Schieffer continued asking whether he thought it was “the government’s fault,” which Rep. Paul corrected to “the policymakers.”

RELATED: Sarah Palin Sticks Up For Ron Paul: Media Treatment Has Been ‘Unfortunate’ And ‘Unfair’

The conversation became more tense as they discussed the Iranian nuclear threat, which Rep. Paul thought could be resolved with diplomacy. “Iran doesn’t have a bomb, there’s no proof… and for us to overreact and talk about having a bomb,” he argued, was faulty. He used Libya as an example for that argument. Schieffer corrected Rep. Paul on the claim that anyone was contemplating the bombing of Iran, thought Rep. Paul noted he meant Republican candidates, not White House officials. The conversation turning more general, Schieffer asked Rep. Paul whether there was a single place on earth he thought the United States should have a military base. Rep. Paul responded that “a submarine is a very worthwhile weapon,” and that “this whole idea that we have to be in 130 countries” was outdated compared to the technology.