Bob Schieffer Grills John McCain: Why Is The GOP ‘Against Every Single Person’ Obama Nominates? 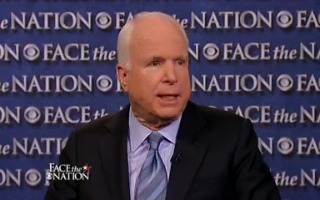 Face The Nation host Bob Schieffer grilled Republican Senator John McCain Sunday on why the GOP seems “to be against every single person” that President Obama has nominated to his cabinet. Schieffer said he “couldn’t remember a time” when the opposing party has had a problem with each of the president’s nominations. “It’s usually been the rule if the president is going to be in charge of the government, we have to give him the people he wants to run it,” he added.

With the exception of John Kerry, Schiffer continued, Republicans have opposed everyone. He questioned McCain specifically about Chuck Hagel, the president’s recent nominee for Secretary of Defense. “He would seem to be your kind of guy, a veteran, a guy who has been shot at,” Schieffer said.

McCain noted that Hagel was “a friend” but claimed that usually with this process, “the previous presidents” would “call the other side” when considering a nomination and say “what do you think about it.” He added that it didn’t matter if the presidents were Republican or Democrat, it had often been done before. “There’s been none of that with this administration,” he said.

McCain then explained that his “legitimate questions” about Hagel are based on his foreign policy views rather than anything personal against either Hagel or the president. When asked if he would vote against Hagel, McCain answered that he had made no decisions on the issue and said “this is why we have hearings.”