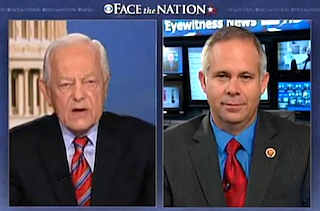 Face the Nation host Bob Schieffer interrogated Representative Tim Huelskamp (R-KA) on the House Republicans’ tactics to shutdown the government and test the breaching of the debt ceiling, challenging Huelskamp to name what, if anything, such measures had accomplished or were intended to accomplish.

“But congressman, don’t you have to focus on keeping the government running?” Schieffer asked.

When Hueslkamp responded by attacking spending again, Schieffer interrupted him. “I think you’ve got a problem that may be worse than all of that, which is that if the government has to default on its debts, and the term ‘the full faith and credit of the United States government’ is no longer operative, we’re going to plunge off into the unknown. Nobody knows what the impact of that will be, on not just our economy but the world economy. Would you be willing to let that happen to postpone Obamacare—which you haven’t been able to do?”

“That is not what the Secretary of the Treasury says,” Schieffer said.

“He said a lot of things a week ago,” Huelskamp said. “I think the White House is trying to scare the markets. I think that’s unfortunate.”

Watch the full segment below, via CBS News: