Bob Schieffer Tears Into WH Adviser Over Response To Scandals: ‘Is The President Out Of Touch?’
video

Bob Schieffer Tears Into WH Adviser Over Response To Scandals: ‘Is The President Out Of Touch?’ 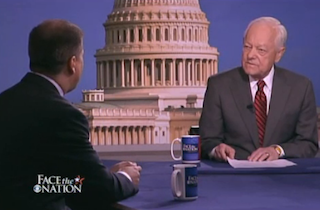 White House adviser Dan Pfeiffer must not have particularly enjoyed himself this weekend, given that his Sunday show appearances have been defensive at best and contentious at worst. CBS’ Face the Nation host Bob Schieffer accounted for the latter as he grilled Pfeiffer on the White House response to the issues — and why the administration pleads ignorance when things go wrong.

Cutting to the chase, Schieffer questioned whether the White House is approaching the issues in earnest (“Does that mean you don’t take any of this seriously?”), which Pfeiffer quickly denied. The chief of staff, he explained, was arguing that: “This is the Republican playbook here which is try, when they don’t have a positive agenda, try to drag Washington into a swamp of partisan fishing expeditions, trumped up hearings and false allegations.”

“You know, I don’t want to compare this in any way to Watergate,” Schieffer responded. “I do not think this is Watergate by any stretch. But you weren’t born then I would guess, but I have to tell you that is exactly the approach that the Nixon administration took. They said, ‘These are all second-rate things. We don’t have time for this. We have to devote our time to the people’s business.’ You’re taking exactly the same line that they did.”

Pfeiffer clarified that the IRS actions were “inexcusable” and demand action — citing to generic points about top-down reviews, et cetera. It’s “very difficult,” Schieffer argued, to understand how the White House would have been ignorant to the goings-on within the agency. Pfeiffer claimed it was so, as Schieffer continued to express skepticism.

“Is this president out of touch?” the CBS host asked, addressing the talk about Obama often appearing to be a bystander. The “actual, real scandal” would have been if the president had interfered with an investigation, Pfeiffer countered.

Schieffer pressed on though: Later in the interview, he denied any desire to be “argumentative,” but pointed out that when the executive branch does something right (e.g. killing Osama bin Laden), the White House has no “hesitancy” in taking credit.

“But with all of these things, when these things happen, you seem to send out officials many times who don’t even seem to know what has happened,” he added, as contrast.

“And I use as an example of that Susan Rice who had no connection whatsoever to the events that took place in Benghazi, and yet she was sent out, appeared on this broadcast, and other Sunday broadcasts, five days after it happens. And I’m not here to get in an argument with you about who changed which word in the talking points and all that. The bottom line is what she told the American people that day bore no resemblance to what had happened on the ground in an incident where four Americans were killed.”

Not quite responding to the point Schieffer was making, Pfeiffer reverted to the much-repeated argument about how the administration put forth information as they received it.

Schieffer reiterated that he was speaking about the “PR plan.”

“Why did you do that?” he asked. “Why didn’t the secretary of state come and tell us what they knew and if you knew nothing say, ‘We don’t know yet’? Why didn’t the White House chief of staff come out? I mean I would, and I mean this as no disrespect to you — why are you here today? Why isn’t the White House chief of staff here to tell us what happened?”

Unsurprisingly, Pfeiffer didn’t broach those questions, rhetorical or not.