Bob Woodward Humblewhines That White House Was Mean to Him Again 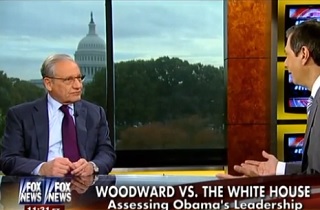 What’s a political reporter to do when his period of greatest relevance dates back to Ted Nugent‘s soiled underpants? If you’re The Washington Post‘s Bob Woodward, you accuse some unnamed official in the White House of “threatening” you, then get embarrassingly called out by that official, then rinse, then repeat. On Howard Kurtz‘s Fox News show MediaBuzz this weekend, Woodward cranked up the siren on his Wahmbulance once again, while humblebragging that the White House blames him for starting all of President Obama‘s bad press.

Since he’s no longer calling Republicans blackmailers and extortionists, Bob Woodward is once again a revered figure among conservatives, who just can’t believe how this tyrannical White House is treating Bob Woodward, according to Bob Woodward. In his MediaBuzz segment, which Fox News previewed last week, Woodward complained to Kurtz that the White House is still angry with him because because they said I started it…Started this idea of he’s got to lead, and he’s too passive at times on these budget issues.”

Setting aside the premise of Woodward’s criticism, that a president ought to make a deal with “extortionists,” or the idea that Bob Woodward could start anything weightier tan a knock-knock joke, or the fact that Kurtz seems to have Fox-ily abandoned his previous position that Woodward needs to nut up, or Woodward’s desperation for attention. What Woodward is doing here is a repetition of the ethically dubious “revelation” he made about Gene Sperling, and he needs to be called out for it. Either the White House official made his comments to Woodward off-the-record, which means he should not be talking about it at all, or the comments were on the record, which means Woodward should identify the source, rather than advance a self-serving version of a conversation that may or may not have happened the way he said it did.

This has little to do with whether someone in the White House cares enough about what Bob Woodward says to get angry about it, and more to do with the game that Bob Woodward is running on his audience. When he tried this con on Gene Sperling, and accused him namelessly of threatening him, it turned out that Sperling sent the nicest pushback email in history. This is part of a pattern from reporters who try to deflect criticism of their own work by whining about pushback. Consider the ferocity of the rebuttals that take place right out in the open in front of everybody, and ask yourself why none of those reporters are whining about it.