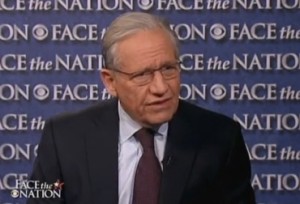 The all-out war between President Obama‘s White House and Washington Post reporter Bob Woodward took another mild turn this morning when, after “Mean” Gene Sperling followed up his threatening email with a blistering barrage of compliments Sunday morning, Woodward reloaded, and told Sperling right where to go: to Woodward’s house, and could he please bring President Obama with him, and maybe some other White House officials? Woodward extended the invitation on CBS News’ Face The Nation, explaining to host Bob Schieffer that “talking works.”

Before Woodward breaks out the smoking jacket and Al Green CDs, though, he ought to get his facts straight. Woodward told Schieffer that he had never said Gene Sperling’s email was “threatening,” but the description he gave to CNN’s Wolf Blitzer crried that clear implication, and deliberately omitted the treacly sweetness of the rest of Sperling’s email. Blitzer certainly read it that way, and when he told Woodward that “those of us who have known you for a long time, we know you’re not going to be intimidated or threatened by any senior official at the White House,” Woodward’s response was “Indeed.”

Perhaps more importantly, though, Woodward misled Schieffer as to the reason for the “feud,” telling him that “I did a column a week ago for the Post, and showed the White House really came up with the idea of the sequester.”

That’s not remotely true, as Sperling’s email demonstrates. The issue was over Woodward’s indefensible claim that the President “moved the goal posts” by seeking revenue as part of the replacement for the sequester. “But I do truly believe you should rethink your comment about saying saying that Potus asking for revenues is moving the goal post. I know you may not believe this, but as a friend, I think you will regret staking out that claim,” Sperling said in that email.

Woodward is wrong on both counts, of course. His dogged attempt to get the Obama administration to “accept paternity” for the sequester, as Woodward terms it, depends on ignoring the reason it was needed in the first place, which was the Republican debt ceiling threat, and on ignoring who actually enacted it. If someone says they’re going to shoot you in the head, and you say, “Wait, why don’t you shoot me in the leg, instead?”, they can’t then get off in court by saying it was your idea to get shot in the leg. Republicans in Congress, by Woodward’s own account, demanded a trigger mechanism, and would not accept one that included revenues, and would have defaulted on the country’s debt without it. Woodward’s own reporting bears that out. It is arguably a matter of opinion as to who owns the greater share of responsibility, but it seems clear to me that without the Republican threat of a catastrophic default, there would be no sequester.

As for “moving the goal posts,” the sequester was always an “action-forcing mechanism,” as Woodward stated, that was put in place to reassure Republicans that a comprehensive deal on deficit reduction would take place. In short, they’d make a “grand bargain,” or die trying. The sequester is the “die trying” part, so unless Woodward is suggesting that the “goal” was to die, he is clearly aware that the sequester and the “grand bargain” are not the same thing. As the White House has pointed out, every discussion of a deficit deal has included a “balanced approach” that would include revenues. The President and his administration officials have made over forty mentions of it just since December.

Schieffer asked Woodward to react to Sperling’s comment, Sunday morning, that the pair “put this behind” them.

“The answer is yes,” Woodward said. “(Gene)’s a peacemaker. I am in the business of listening, and I’m going to invite him over to my house, if he’ll come, and hopefully he’ll bring others from the White House, maybe the President himself, and we can… you know, talking really works.”

Here’s the clip, from CBS News’ Face The Nation: