Bob Woodward Tears Into Obama With Veiled Nixonian Criticism: ‘Madness That I Haven’t Seen In A Long Time’ 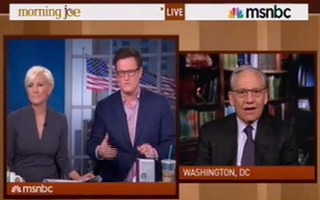 Washington Post reporter Bob Woodward’s ongoing war of words with President Barack Obama’s White House escalated on Wednesday when Woodward took to the set of MSNBC’s Morning Joe to slam the president’s handling of the sequester fight. Woodward said that the president has displayed a “kind of madness” in his decision to make those cuts as painful and deleterious to the nation’s war fighting capability as possible.

RELATED: Megyn Kelly Panel Fights Over White House’s Trashing Bob Woodward Due To His Account Of The Sequester

Host Joe Scarborough began the interview by asking for a recap of the fight between Woodward and the administration regarding who proposed the sequester first. Woodward informed Scarborough that the White House has conceded that he was originally right and that the idea for sequester came from the Obama administration.

He then turned to the sequester: “I think peoples’ heads are about to explode about all of this, you know, what the hell is going on here,” Woodward said. “I’m not sure the White House understands exactly what happened in all of these negotiations at the end of 2011 with the sequester and the super committee, because they were really on the sidelines.”

Woodward slammed Obama’s decision to announce that sequester cuts would force an American aircraft carrier to not deploy to the Persian Gulf.

“Under the Constitution, the president is commander-in-chief and employs the force. And so we now have the president going out because of this piece of paper and this agreement, I can’t do what I need to do to protect the country,” Woodward concluded. “That’s a kind of madness that I haven’t seen in a long time.”