Bob Woodward to Fox: Obamacare Isn’t ‘Watergate,’ But It Will Get Worse 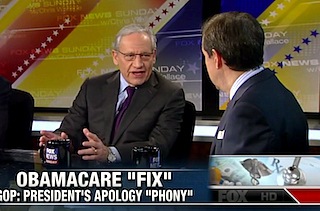 On Fox News Sunday, legendary journalist Bob Woodward downplayed the analogies being tossed around comparing the troubled Affordable Care Act rollout to presidential scandals, but also argued that the rollout of the Affordable Care Act was likely to get worse before it got better.

“What this is, it’s a mess, clearly, but what it isn’t, and I think you have to look at the question of motive,” Woodward said. “And the president’s motive here, even though there were deep problems with the implementation, he wants to do something good for 30 million people and get them health insurance. So this isn’t Watergate, this isn’t Bill Clinton and Monica Lewinsky.”

“I’m not saying it’s a scandal,” host Chris Wallace said. “What it seems to be is rank incompetence.”

“There’s no question about that,” Woodward replied. “But you see all of these stories and this frenzy out there, ‘the game over, the presidency is over,’ some people are saying. I think that’s not the case.”