Bobby Jindal: Obama Is Running Against Pres. Bush And It’s 8 Years Too Late For That
Video

Bobby Jindal: Obama Is Running Against Pres. Bush And It’s 8 Years Too Late For That 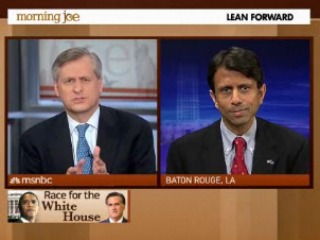 “I think,” he said, referring to topics like Romney’s dog incident, “the America voters are smart enough to sift through that nonsense and realize this is about two different visions.

RELATED: Gov. Jindal: Obama Is ‘Most Liberal, Most Incompetent President… Since Jimmy Carter’

“Look, President Obama can’t run on his record,” Jindal continued. “Twenty-three million unemployed, underemployed Americans. And he said at the beginning of his term if he didn’t turn around the economy in three years, he’d be a one-term president. Promised to cut the deficit in half, we’ve got trillion dollar plus deficits each year. He pomised health care premiums $2500 with ObamaCare; that’s not happening. His adviser said unemployment would be below 8 percent with the $800 billion stimulus bill; that’s not happening. So he can’t run on his record. Instead, he’s going to have to to attack Governor Romney. But I think the voters will see through that.”

Jindal rejected panelist Donny Deutsch‘s assertion that, according to new polling data, people are better off now than they were 3.5 years ago at the beginning of Obama’s term.

“Over half a million more Americans are unemployed than the day the President took office,” he said. “You look at median income, it’s actually gone down under this President. You look median family worth, two decade low. You look at home owners with mortgages, 30 percent of them are underwater. So, you look at any objective economic indicators we are not better off than we were four years. And I think if the voters go in the booth asking themselves that one question — Am I better off than four years ago? — I think Mitt Romney wins this election going away.” He also dismissed Obama’s immigration policy as mere “pandering” that ultimately treats “the symptoms, not the root cause of the problems.”

Jindal doubled down when asked, again, whether he believes we’re not better off than we were 3.5 years ago. Absolutely we’re not, he said, because the President “continues to double down on a failed strategy:”

This what is was remarkable to me. Up until now, this President has been a gifted speaker. He’s been able to change the polls just by giving a great speech; he’s been one of the best speakers in my adult lifetime watching politicians give speeches. The speech in Ohio, nearly an hour long, fell flat. Same old, same old policies that haven’t worked.

He’s basically… it was, we went from hope and change to divide and blame. Now all of a sudden he’s trying to run against President Bush, eight years too late for that. He’s offering the same old policies and now trying to divide us based on class lines, on race lines, on gender lines, and any lines to help him get re-elected, so, absolutely I think the American people aren’t better off.