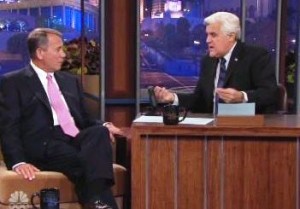 Speaker of the House John Boehner appeared on The Tonight Show Thursday night and chatted with Jay Leno about Washington politics, working with President Obama, and having to lead a huge group of ideologically diverse Republicans. After some bantering and Boehner sharing his life story, Leno asked about all the recent GOP infighting and the tea party’s role in Congress. Boehner said “it’s all a fight over tactics” and thinks the tea party has brought “great energy to the political process.” What he objected to in his now-infamous rant in which he lashed out at outside conservative groups, he explained, was people deciding “nothing I could do was ever conservative enough for them.”

In the second half of the interview, Leno brought up the government shutdown, which Boehner called a “very predictable disaster” from the get-go. Leno said it bothered him to hear tea party Republicans gleefully trying to take down Obamacare, since no one wants to see elected officials “take such joy in seeing something fail.”

They bantered a bit about 2016 and BridgeGate before Leno brought up Edward Snowden. Boehner called him a “traitor to the country” and defended the NSA from critics who say it has too much ability to spy on people.

And as for whether Boehner would consider a run in the big leagues any time soon, he explained that he enjoys smoking and drinking, “and I’m not giving that up to be President of the United States.”

Watch the videos below, via NBC: