Bon Jovi’s New Restaurant Makes Too Much Sense; Could Both OWS And Tea Party Embrace It? 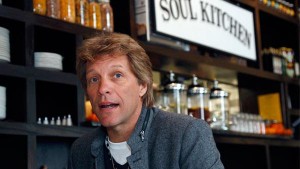 After a soft launch last week, Jon Bon Jovi‘s new restaurant, Soul Kitchen, opened in New Jersey with the promise of giving meals away in exchange for volunteer efforts in the kitchen, food banks, or other local charities. The premise is really that simple: diners can earn a voucher for a free meal through volunteering (waiting tables, weeding in the organic garden, washing pots and dishes, or doing other chores, according to the Asbury Park Press). Those who can afford it are asked to leave suggested donations in an envelope at the table. If they can leave more, it’s encouraged. The menu has no prices. And the rocker is even taking a hands-on approach to the project. “Last Friday, I was at the White House, serving on the Council for Community Solutions, got on a train, changed in the bathroom and got here in time to wash dishes Friday night,” he told the AP. “I’m the dishwasher, for real. I can’t cook a lick.”

Bon Jovi also explained to reporters that the eatery shouldn’t be considered a soup kitchen, stressing that it’s a legitimate restaurant. The executive chef, Zeet Peabody, has worked in three New York restaurants, and told the Wall Street Journal:

“We want to execute at a high standard without intimidating anyone. There’s no foam. There’s no blah blah. It’s down-home cooking. The top seller is a rainbow beet salad. We’re using honey from Jon’s property. It’s not the reinvention of gastronomy.”

The clientele isn’t entirely made up of volunteers; to many people, it’s just another restaurant opened up by a rock star. The bonus is being able to provide meals to some people who can’t afford it. And the food — most of it donated by a nearby Whole Foods — is all top quality, including crusted catfish and grilled salmon. Granted, salmon is available for free these days in Zuccotti Park, but here you get a table and some silverware. And there are fewer hippies.

Bon Jovi’s plan is to eventually bring the concept across the country, opening Soul Kitchens in more cities. But, for now, the establishment exists only in Jersey.

Still, the concept of giving food to those who volunteer, while asking the rich patrons for a little extra to help subsidize the outfit, seems like an idea that could be embraced by pretty much everyone, Tea Partier (a private enterprise helping out without government involvement) and Occupier (the 1% helping out the 99%) alike.

Granted, there might always be the doubters who think that, left to their own devices, the rich won’t pay as much as they could (or worse, skip out on tips) and the poor will eventually want to stop volunteering and go back to soup kitchens, leaving the place understaffed, but those are pessimistic extremes. The fun here is that Bon Jovi has, possibly unwittingly, created a social situation that could be a great experiment for the best and worst society has to offer. Either way the restaurant’s concept will probably turn out to be more “genius” than “failed experiment.” Likely by a huge amount.

Video of Bon Jovi’s rainy opening, courtesy of ABC, is below: