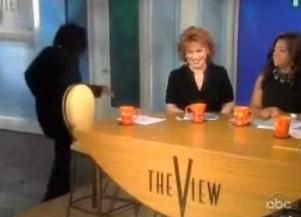 The View hosts began the show this morning discussing the Tiger Woods story, and although Whoopi Goldberg introduced the segment, she spent the majority of the discussion looking noticeably bored while staying silent.

Until Barbara Walters asked her what she thought, and things started going downhill.

After all the other hosts weighed in, Walters asked for Goldberg’s opinion. “I am bored out of my gourd,” she said, to cheers from the crowd. “I brought it up because we all decided that’s something we wanted to talk about.”

She downplayed the story – how each aspect of the story doesn’t affect whether there’s “food on my table.” Walters countered: “Well that’s true of every subject we discuss today. We might as well go home!”

Goldberg, perhaps half-jokingly, said, “alright,” got up from her seat and started walking toward backstage. The audience seemed to take it seriously.

“This is for me one of those subjects where people demanding that you live up to their expectations is outrageous,” she said, as she took her seat again.

The comments, and near walk-off (whether it was a joke or not), doesn’t take away from the fact that Goldberg was clearly and visibly bored with the discussion. A tipster says this is something that is happening more and more at The View, where Goldberg takes herself completely out of conversations. In a recent interview with Greta Van Susteren on Fox News, she was asked if her role at The View is boring her. “There are things that we have to talk about, like reality shows, that’s not something that I really care about,” she said, although she wouldn’t say she was bored (unlike today).

Could Rosie O’Donnell‘s replacement be heading for the same fate, with an exit after only a couple years?

Here’s the exchange from this morning: