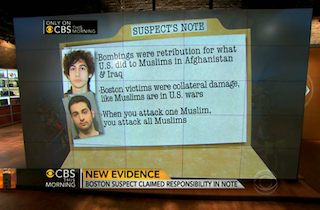 On Thursday, CBS News’ John Miller reported that one of the Boston Marathon bombing suspects, Dzhokhar Tsarnaev, left a note in the boat he was hiding in during the manhunt after the attack. In it, Tsarnaev reportedly wrote the attack was motivated by the U.S. wars in Afghanistan and Iraq, where many Muslims have been collateral damage.

Miller reported that the Tsarnaev claimed responsibility for the attack in the note, which he wrote on the interior wall of the boat.

The note, scrawled with a pen on the interior wall of the cabin, said the bombings were retribution for U.S. military action in Afghanistan and Iraq, and called the Boston victims collateral damage in the same way Muslims have been in the American-led wars. “When you attack one Muslim, you attack all Muslims,” the note added.
[…]
Miller’s sources say the wall the note was written on was riddled with bullet holes from shots fired into the boat. The shots were fired after Dzhokhar came up through the tarp covering the boat amid police fears that he had another bomb.

The note is “certainly admissible” and will be a notable piece of evidence during the trial, Miller said — since it offers a clear motive for the attack and is “consistent with what he told investigators while he was in custody.” While Tsarnaev did offer much of the same information to investigators, Miller said that was prior to being read his Miranda rights.

Tsarnaev reportedly also said he didn’t mourn his brother Tamerlan, the other suspect who died in a shootout with police, because he was a martyr.

Watch the report, via CBS: