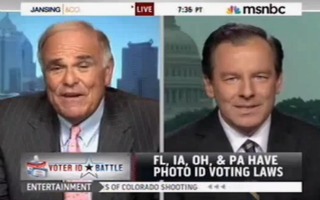 In a segment on MSNBC on Tuesday, two political operatives rehearsed their familiar parroting of political talking points in the debate over voter identification laws. Both sides of the debate are benefiting from the topic with each party’s base becoming ever more fired up as they perceive themselves to be under siege by a malevolent opposition which is actively attempting to undermine their votes. But this debate masks the real problem of voter fraud which neither party wants to address – the problem of absentee ballot fraud. This institutionally accepted practice is rampant and has corrupted the American electoral system for decades, but no one bothers to address it because both sides benefit from the practice.

On Tuesday, former Pennsylvania Gov. Ed Rendell told MSNBC said that it was easier to get a gun in his home state of Pennsylvania than it was to register to vote. He further suggested that the extent of voter ID laws was to restrict Democratic constituents’ access to the polls.

He debated former Newt Gingrich campaign consultant Rick Tyler on the issue, who countered by asking Rendell if airports and libraries also favored Republicans in disproportionate numbers because they too require photo ID. “Maybe [libraries are] disenfranchising people because they don’t want them to be able to read,” Tyler asked rhetorically.

Both political operatives are guilty of grossly oversimplifying the situation, as are the political parties they represent.

As MSNBC host Touré said recently, “voter fraud is a red herring.” Now, his follow up – that voter ID laws were intended solely to disenfranchise minority voters so they could not cast their ballots for Democrats – is offensive, conspiratorial and unsubstantiated. But he has a point: if Democratic opponents of voter ID laws oppose those laws because it is a heavy-handed way to address the relatively few cases of individuals showing up at the polls and voting under other people’s names, they are largely correct.

Opponents of voter ID laws often cite a statistic from the Bush-era, when an investigation into voter fraud cases between 2001 and 2006 netted only 86 prosecutions. This is a measly figure, although some opponents of voter ID laws confuse prosecutions with existing cases. Voter fraud is often a victimless crime (insofar as the victim is often unaware their vote has been stolen) and is difficult to prove in court on the rare occasion when there is enough evidence to prosecute voter fraudsters. Most cases of fraud go unreported.

However, the endemic problem that plagues American elections is not voters showing up to the polls and forging a signature in order to cast another voter’s ballot. The real issue is the substantial problem of absentee ballot fraud. This is a bipartisan scheme. It is rampant and it is often officially sanctioned, according to the testimony of those who are prosecuted.

This blog post chronicles and links to stories about the more than 40 individuals who were arrested on charges of absentee ballot stuffing in order to influence both local and national elections in favor of Democratic politicians.

In December 2011, six Democratic operatives were arrested and pleaded guilty to charges of absentee ballot stuffing in New York state. “This is an on-going scheme and it occurs on both sides of the aisle,” convicted Democratic operative Anthony DeFiglio told police after his arrest in November 2009. “The people who are targeted live in low-income housing and there is a sense that they are a lot less likely to ask any questions.” DeFiglio continued, saying “it was common knowledge that these people were never going to receive an absentee ballot.”

But the phenomenon is not limited to Democratic party operatives. In June of last year, Indiana’s Republican secretary of state was found guilty of six of seven counts of voter fraud including false registration, voting in another precinct, submitting a false ballot, theft and perjury.

In 1997, the Miami Herald won a Pulitzer Prize for deconstructing how Republican Joe Carollo defeated Democrat Xavier Suarez in Miami’s mayoral race despite losing at the polls via absentee ballot fraud. “That’s how it’s really done. How elections are pilfered. With absentee ballots,” writes the Miami Herald’s Fred Grimm.

These are just the cases that become known. Many more cases of absentee ballot fraud go undetected and unreported.

This is one instance where both parties are truly guilty of ignoring a corrupt status quo. Democratic opponents of voter ID who dare suggest there is no voter fraud are being patently disingenuous. Republicans who submit that voter ID laws are the answer to every instance of voter fraud are guilty of being similarly coy about the real problem.

Democrats and Republicans are benefiting from energizing their base voters by insisting their vote is under assault from the other side, but neither is addressing the real problem. Institutional absentee ballot fraud is an epidemic that threatens the integrity of America’s political system and no one seems particularly concerned about it.

Watch the party-line debate on voter ID via MSNBC below: