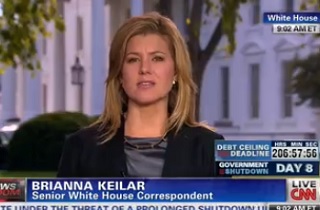 Media Critic-in-Chief Barack Obama has joined many others in critiquing the news media’s devotion to the narrative that both sides are equally responsible for the current government shutdown/default crisis, and nowhere has that devotion been more religious than at CNN. On Tuesday morning, though, a glimmer of hope shined through a crack in the cathedral of neutrality, as CNN White House reporter Brianna Keilar told anchor Carol Costello that polling on the issue shows that “Americans are not impressed, especially with Republicans.”

Keilar was teeing up a new CNN/ORC poll that actually shows American anger more closely bunched than in others, but she used a description that you won’t often hear in the ostensibly neutral press. “Only one thing is for certain,” Keilar said. “Americans are not impressed, especially with Republicans. In a new CNN/ORC international poll, 63% of those surveyed blamed the GOP for the shutdown. 57% point the finger at Democrats, and 53% hold President Obama accountable.”

There’s a bit of a chicken-or-egg argument to be made over whether the media’s “both sides” narrative has the effect of influencing public opinion into spreading the blame around, but at least one media outlet now seems to be getting the message: no one’s happy about this, but they’re more unhappy with Republicans.

Keilar does go on to add that it’s possible that “both sides could keep talking past each other until the US defaults,” but these are baby steps. Only one side has the power to raise the debt ceiling, so if it doesn’t get done, here’s hoping Keilar reports that accurately from the middle of a food riot.