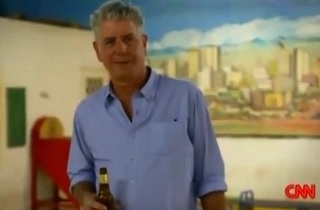 CNN’s Anthony Bourdain: Parts Unknown may sound like the world’s worst ingredient label, but the show has turned out to be a recipe for ratings success in its short life. Along the way, though, Chef Anthony Bourdain has attracted attention for his use of profanity on the show, and the network’s decision to air it. Conservative media watchdog Newsbusters has been critical of the profanity on CNN’s air, while Tina Nguyen of our sister site, The Braiser, has defended Bourdain’s rhetorical garnishes. I find myself in the unusual position of agreeing with Newsbusters‘ Noel Sheppard on this one.

Tina and Mediaite’s Joe Concha get a lot right about Bourdain’s show: the outrage is probably a mere outgrowth of conservatives’ desire to undermine the mainstream media, and CNN’s relaxing of standards likely is an attempt to augment the show’s “edge,” and shouldn’t really be a factor in judging its quality. Furthermore, I’m vigorously opposed to the bleeping of obscenities, and of the idea that there are such things as “bad words.” Even the most offensive word can be used to make a valuable point, while otherwise innocuous words can be strung together to form a reprehensible idea. I support letting people be heard for who they are. I’ve also never understood why I have to endure bleeps on cable channels that I’m paying for. Isn’t that the whole pointof pay cable?

However, Newsbusters’ Noel Sheppard has a point, or at least, illustrates one:

This Sunday, the host actually jokingly gave himself the name “The Enormous C–k”

Bourdain was in a gaming facility in Bogota, Colombia. One of his opponents was introduced to him as “El Pollo Viejo” which means “The Old Chicken.”

The host then looked at the camera and said, “I need a poultry name. He’s calling himself ‘The Old Chicken.’ I shall be ‘The Enormous C–k.’”

Ladies and gentlemen, this is CNN.

If you’re a cuss-lovin’ liberal like me, Noel Sheppard probably sounds like an old biddy, scribbling down scrupulously dashed-out obscenities when he ought to be turning the channel, am I right?

But that’s the whole point: if I sat down to watch Cinemax with my Grandma, I’d expect to be embarrassed by the channel’s pseudo-porn offerings, but would not have the same trepidation about CNN. Sure, there are times when journalism dictates a deviation from language standards, but as Sheppard points out, Parts Unknown is not live, and it’s not a news show. I don’t agree with language standards, but once you’ve established them, you have made a tacit agreement with your audience. Sheppard’s interest may well be in moralizing, but he’s right that this is a deviation from that agreement. If this is the new agreement, fair enough, but then viewer offense is fair, as well.