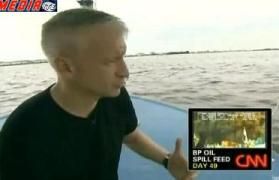 Depending on your frame of reference, Jaime Escalante or Admiral William Adama, (apparently Obama voters), think Obama has “lost it” due to his response to the BP oil spill. Actor Edward James Olmos told Anderson Cooper as much last night.

But while actors are talking to Cooper, BP is mostly avoiding the CNN anchor.

As Cooper put it, Olmos was out on the water surveying the spill himself when he asked him for a brief interview. Cooper expressed his confusion as to why the U.S. Government would say “it doesn’t really matter how big the spill is, it doesn’t really matter how much oil is leaking out,” in the days when it seemed the spill was far smaller than it turned out to be. Olmos paused, promised to “only say this once,” and continued:

I voted for him, our President, and I’m proud of it. And I think he’s a great man. He has a great family. But somewhere along the line, he’s lost it. They should be here right now. He should move the White House here. They should take over hotels and bring income and people and bring forces here. And start the slow process of building a community, a family, that’s going to clean this up.

It’s a pretty damning critique, coming from a well-respected actor (but an actor nonetheless – it’s still not James Carville).

While Cooper has spent significant time in the Gulf region, talking to a wide variety of guests, BP has largely avoided the show. Cooper showed a look back at all the times he’s mentioned asking BP to make a guest available for an interview, with them declining all but one day. They did again last night.

Here’s the Olmos comment, and below, the BP look back: