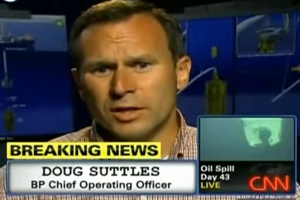 BP COO Doug Suttles– the kind of earnest one, not the one that keeps putting his foot in his mouth every time he sees a camera– visited CNN’s John King for a one-on-one about BP’s new plan to plug the oil well, the upcoming criminal investigation on his company, and whether the Obama administration’s newly debuted tougher rhetoric on the company worries him. At the very least, he’s not surprised.

King questioned Suttles on a variety of things– whether the new Lower Marine Riser Package will work (“if this works we should catch the majority of the flow”), whether there was progress on drilling relief wells, and the state of his company. Some of the toughest questions, though, were regarding BP’s relationship with Washington, and how the company was taking the White House’s sudden shift to a much tougher stance against BP. “I wouldn’t say it was surprising,” he responded, “clearly everyone wants this to be fully investigated from every dimension, so I wouldn’t say I’m surprised, the fact that they’ve done this.”

As for future criminal investigations, he said the FBI had not yet come to their offices, but that they have “been retaining all the records since the beginning” and felt confident that they would be able to cooperate with any investigation. He also answered a question on whether the new rhetoric puts a strain on his relationship with the federal government, noting that “at the operating level, there have been very few differences” and that, while “the government clearly presses us very hard,” he was “pretty pleased with the efforts so far.”

Video from John King USA below: