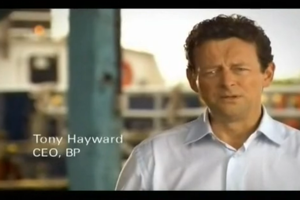 Public approval ratings for BP right now are about as low as the depth of the oil well they can’t seem to control on the bottom of the Gulf of Mexico, and their strategy to stop the gushing (and justified) vitriol against them seems to be similar: cap it with a publicity blitz. BP has released an ad taking full responsibility for the disaster and attempting to reassure the American people that they are doing their best.

The ads are being produced by Purple Strategies, run by political consultants Steve McMahon and Alex Castellanos (who is also an analyst for CNN), and will be accompanied by newspaper advertisements with the same message. The TV ad goes through what specific measures BP is taking to solve the problem and showcases CEO Tony Hayward as both narrator and face of the company, telling viewers that “to those affected and their families, I’m deeply sorry,” and that “we will get this done. We will make this right.”

It seems the idea is that Hayward should be front and center, apologizing and taking responsibility. But BP has already proven to have much more sympathetic characters in its stable– COO Doug Suttles particularly comes to mind– who could do the same job without bringing the baggage Hayward does to the clip. It just seems unwise to put him there. Isn’t Tony Hayward the last person anyone living near the Gulf wants to see right now? He has already done more than enough to damage the company’s image– one spot where he tries to sound remotely sympathetic won’t fix that.

Perhaps it will be comforting to some people to see the CEO take charge and responsibility, but for most it will probably be too little, too late. BP’s new ad below: