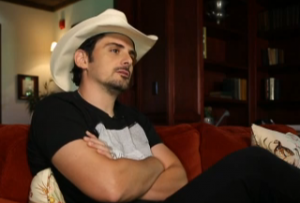 Country singer Brad Paisley and his wife Kimberly Williams-Paisley opened up about being victims of a “catfishing” hoax in a segment for ABC’s Nightline airing Wednesday night. The Paisleys received an e-mail from someone claiming to be the mother of a dying girl who was a big fan and wanted to hear from them before they died, but it all turned out to be an elaborate ruse.

Kimberly Paisley explained they exchanged a few e-mails, phone calls, and text messages, as well as a few photos of this dying girl and songs this girl supposedly wrote. She found it odd that this mother “wasn’t dying to get ahold of me.”

Brad Paisley himself even played “Amazing Grace” over the phone for who he assumed was the daughter. He said, “You’re singing to someone’s dying kid… And in the middle of it, there’s no way that’s not real. How can that not be real?”

This girl then died, and when the Paisleys offered to send flowers for the funeral, the mother denied their request and sent them an angry e-mail. That was when alarms went off in their heads, and they found out the whole thing was a hoax and the photos they got were pulled from someone else’s blog.

So it just goes to show you, even big stars can be fooled by online scams.

Nightline will air the full segment tonight. We will add the video and additional information once it is available.

Watch a clip below, via ABC News: