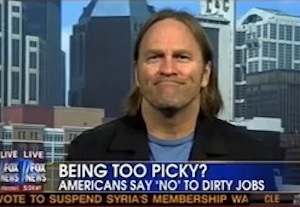 Zany conservative comic Brad Stine appeared on Monday’s Fox and Friends to rag on “lazy Americans” who should feel “ashamed” they’re unemployed. Anchor Gretchen Carlson asked Stine if Americans were willing to do tough jobs. “Are Americans too lazy to do that? The answer is yes!” Stine exclaimed. “…We used to make it shameful not to work. We called people that didn’t work hobos! What happened to the hobos? We need to bring these people back and make them feel ashamed but political correctness came in and said we don’t want them to feel bad about not working. Yes, we do! Get to work! The ideology that told people that we don’t have to work hard, we’ll subsidize people and make high class hobos by taking money who work and give it to people that don’t work. Effectively, they bought them off.”

“What’s happening right now in Alabama and Washington and other areas where they’ve cracked down on illegal immigration is farmers there and other businesses basically say, wait, we can’t hire anyone,” observed co-host Clayton Morris. “We can’t get Americans to do these jobs.”

“We’ve been trained not to do those jobs,” Stine explained. “We used to do it and during the Depression, people took any job they could get. It’s what’s at stake, you know, people say Americans won’t go out in the field and pick cabbage for 10 hours. You know why? Because we hate cabbage! That’s really the key — what’s the biggest problem that can happen? Oh, there’s going to be a shortage in cole slaw. Nobody cares!” Stine vociferated. “You tell an American man that if you don’t get on a boat for two months with the possibility of being swept aside and dying, if you don’t do that, we’re not going to have lobster anymore, you have everybody signing up!”

Watch Stine’s go off on “high-class hobos” below via Fox News: