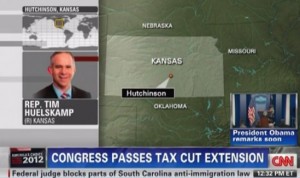 The fallout from the House GOP’s  (including Tea Party members) cave-in on the payroll tax cut extension has been heavier than a dumpster full of wet tea bags. Tea Party supporters are furious that not a single member had the stones to object its passage by unanimous consent. Rep. Tim Huelskamp (R-KS) tried to save a little face by telling CNN’s T.J. Holmes that he would totally have stopped the measure, if only he could have gotten there in time! Upon follow up, though, not so much.

House Republicans have taken to the silver screen for inspiration this year, watching a clip of the Ben Affleck gangster flick The Town to psych themselves up for the debt ceiling fight, and recently, huddled together comparing themselves to Braveheart‘s William Wallace character. At this point, I’d be happy to lend them a copy of The Bad News Bears.

Huelskamp began by repeating the transparent talking point that the House wanted to pass a yearlong extension all along (they opposed a clean extension, and when the Senate agreed to a compromise, then insisted on an amendment-laden 1-year extension), then Holmes asked him, “Did you give any thought to going back and going on the House floor and objecting today?”

“That’s all it would have taken,” Holmes said. “One person could have stopped this. Did you think about doing that?”

“Actually, I did,” Rep. Huelskamp replied. “Problem is by the time we were notified that the unanimous consent agreement would be offered, where I come from in Kansas, I can’t get to Washington quick enough on this short notice.”

In case that wasn’t clear enough, the Congressman added, “We did think about that, but there’s no way to fly in on time to make that happen.”

Holmes, perhaps sensing some wiggle-room, tried to nail him down. “You’re telling me the only thing that kept you from objecting and keeping this two-month extension going forward was that you just couldn’t get there in time? You would have if you could have?”

“No,” Rep. Huelskamp replied, “what I’m saying is i could not make it, number one. Number two, when our leadership decided to drop our desire for a one-year extension to give americans a $1,000 tax cut, versus the two-month variety apparently there were enough folks that wanted to take that fight and follow through so as a result we’re going to have to come back in january and go through another two-week debate over this in order to try to extend it the rest of the year.”

As William Wallace once bellowed on horseback, “They may take our lives, but this is an election year, so we can’t kill a middle-class tax cut!”