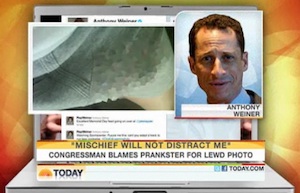 After seeming very reluctant to cover the strange story involving Twitter, a lewd picture and Rep. Anthony Weiner (D-NY) – heretofore known as “Weinergate” — the mainstream media now seems to be embracing the story with open arms, just five days after the story broke Friday night. For the clearest evidence that the mainstreamest of the mainstream media are diving headlong into this story, I present the following clip from TODAY, in which Luke Russert introduces the story as producers show the actual picture that, to our knowledge, had thus far only been shown on late night programming like The Daily Show.

First, let’s recap how just how this story initially broke and the media’s general reaction. Andrew Breitbart‘s BigGovernment broke the story late Friday night. In the following day, only predictable right-of-center websites picked up on the story (in fact, Mediaite didn’t publish our version of the story until early Saturday evening). This was the sort of curious and confusing controversy that is perfect fodder for the political blogosphere. In fact, Memorial Day weekend, for many writers and editors of political blogs and websites, will be forever known as “The Weinergate Weekend.”

But the mainstream media, or more to the point, cable and broadcast news, treated this story with a big, throbbing dose of skepticism, not really even mentioning it at all on air until Monday afternoon, when a CNN crew caught up with Rep. Weiner in his Queens, NY neighborhood. It was a nice get for CNN, and once they ran the Weinergate story up the flagpole, other TV news outlets began to salute, and take notice that this was a story that was worth covering.

But morning cable news programs — which so often and effectively introduce the news narratives of the day — still ignored the story Tuesday morning. No mention on Fox and Friends, MSNBC’s Morning Joe or CNN’s American Morning. Yes, Bill Hemmer made a small mention of the story, and Carl Cameron filed a similarly brief report later in the day (sorry!), but still no coverage on MSNBC. However, CNN continued to get ahead of the story (last one, I swear), going so far to interview Breitbart on air, quickly followed by an oddly dismissive Jeffrey Toobin.

But the real star here CNN’s Dana Bash, who tracked Weiner down for another improvised Q&A, and seemed to be the central reporter at Weiners press briefing on Capitol Hill. If you haven’t seen this train wreck of a media event, please check it out, because the defensive and irritable Weiner (call your doctor if condition persists) only added fuel to the fire with his petulant behavior, rather than fulfilling his wish that this “distraction” would just go away.

That leads us to the TODAY coverage this morning, complete with the inclusion of the lewd pic. Just five days after the story broke on the Internet, the mainstream media appears to recognize that this is a real story with just as many interesting questions than there are real answers and facts at this point. It’s reasonable suggest that the news media have shown more restraint than a pair of gray undies so far, and yes, the fact that it broke over a holiday weekend deserves a mention as a possible explanation for why they were so slow to react.

There is another explanation, however, for why the mainstream media has been slow on the uptake. Some right-of-center columnists and bloggers firmly believe that the news media is unfairly biased towards Democratic and liberal politicians. Andrew Breitbart is surely wondering how this story would have been covered had the central figure been a conservative politician. The truth is, in this writer’s esteem, that’s more than a fair question to ask. However, given the bulk of the anomalies in this story, and the paucity of hard facts over the weekend, the answer is there might not have been much difference at all.

Watch the TODAY segment below, courtesy of NBC News.