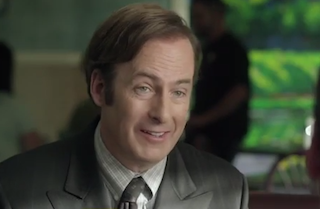 Over the weekend, AMC quietly released the first footage from the network’s upcoming, highly-anticipated Breaking Bad spin-off Better Call Saul, starring Bob Odenkirk as shady lawyer Saul Goodman. The short clip below, in which the title character can be seen comparing retaining a lawyer to having health insurance, aired on AMC, but has not been officially released online.

Last month, AMC announced that the show’s timeline would overlap with that of Breaking Bad’s making it something other than a traditional prequel as it was originally described. “One of the great things about having a time line which is flexible is that perhaps some of it takes place before Breaking Bad, during Breaking Bad, and after Breaking Bad. That gives us the ability to bring back characters that were killed on Breaking Bad,” executive producer Peter Gould told the New York Daily News.

Jonathan Banks, who played Mike Ehrmantraut on the original show will be joining Better Call Saul as a series regular and Bryan Cranston has hinted that his Walter White could show up in a cameo as well. Cranston also plans to serve as director for at least one episode of the new show, telling The Daily Beast, “It’s family. They’ve got the same crew, and it’s exciting to think that we can rekindle that flame; that it’s still alive.”

According to the new promo, Better Call Saul will debut in February 2015.