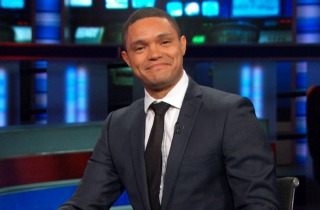 According to the New York Times’ David Itzkoff, Trevor Noah is the new host of the Daily Show, replacing longtime host Jon Stewart.

Noah has appeared on the show as a correspondent only three times. However, more seasoned members of the shows all appeared to take passes, with several departing to other networks to start their own ventures. John Oliver, until last year the most obvious replacement, instead decamped for his own show on HBO.

“I’m thrilled for the show and for Trevor,” Stewart said Monday. “He’s a tremendous comic and talent that we’ve loved working with.”

“You don’t hope to find the next Jon Stewart – there is no next Jon Stewart,” said Comedy Central’s president Michele Ganeless. “So, our goal was to find someone who brings something really exciting and new and different.”

Like Stewart, Noah is no stranger to tackling thorny issues. In South Africa, he was known for riffing on the topics of race and politics, even using his mixed-race parentage to get laughs. Noting that his mother is a black South African and his father a white Swiss, he once told an audience, “I was born a crime,” according to a 2013 report in the Wall Street Journal.

And he has experience with wee-hours programming, He hosted a latenight show in South Africa for two seasons, according to a biography located at his website, which bills him as the first standup comedian from South Africa to appear on either NBC’s “The Tonight Show With Jay Leno” or CBS’ “Late Show With David Letterman.”

Noah’s promotion was hinted at several days ago, but few expected an announcement this soon. According to Itzkoff, Comedy Central has not decided when the switch will happen.